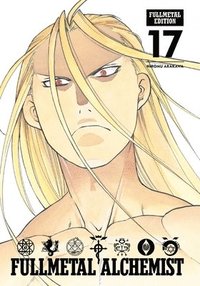 av Hiromu Arakawa
Inbunden Engelska, 2022-07-07
205
Köp
Spara som favorit
Alchemy tore the Elric brothers' bodies apart. Can their bond make them whole again? A hardcover collector's edition of one of the most beloved manga and anime of all time! Fully remastered with an updated translation and completely fresh lettering, and presented with color pages on large-trim, archival-quality paper, this gorgeous hardcover edition presents the timeless dark adventures of the Elric brothers as they were truly meant to be seen. Includes brand-new cover art, with a new color insert and behind-the-scenes character sketches from author Hiromu Arakawa! In an alchemical ritual gone wrong, Edward Elric lost his arm and his leg, and his brother Alphonse became nothing but a soul in a suit of armor. In a terrible twist of fate, the sins that the brothers and their closest allies committed are used to unleash their enemy's greatest powers.
Visa hela texten

Born in Hokkaido, Japan, Hiromu Arakawa first attracted attention in 1999 with her award-winning manga Stray Dog. Her series Fullmetal Alchemist was serialized from 2001 to 2010 with a story that spanned 27 volumes and became an international critical and commercial success, receiving both the Shogakukan Manga Award and Seiun Award and selling over 70 million copies worldwide. Fullmetal Alchemist has been adapted into anime twice, first as Fullmetal Alchemist in 2003 and again as Fullmetal Alchemist: Brotherhood in 2009. The series has also inspired numerous films, video games, and novels.