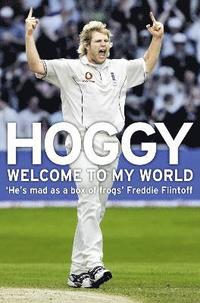 Welcome to My World

av Matthew Hoggard
Häftad Engelska, 2010-04-29
279
Bevaka
Spara som favorit
Tillfälligt slut – klicka "Bevaka" för att få ett mejl så fort boken går att köpa igen.
The quintessential barking-mad Yorkshire cricketer, 'Hoggy's' record-breaking bowling exploits for England allied to his humorous, uniquely oddball yet hugely endearing attitude to sport and life makes this essential reading for all lovers of the game. More than just a line-and-length cricketer's biography, Hoggy offers an entertaining insight into the weird and wonderful world of one of cricket's true characters. From the pub to the wicket and everywhere in-between, the dogged nightwatchman and wicket-taker looks beyond the runs and wickets to reveal what cricketers really get up to on tour and in the dressing room ...
Visa hela texten

Hoggard on Hoggard: 'I'm from Yorkshire. I say what I like and I like what I bloody well say. I'm not one for beating around the bush, I am not politically correct...' `An engaging memoir.' The Times `A wonderful, honest and characteristically unhinged autobiography.' Wisden Cricketer

Matthew Hoggard was born in Pudsey, Yorkshire in December 1976. A right-arm orthodox swing bowler, he played for his home club Yorkshire for 13 years until signing with Leicestershire as their captain for the start of the 2010 season. He made his England Test debut in June 2000 against the West Indies. He currently stands sixth in the list of all-time England Test wicket-takers with 240 from 64 matches. He is married to wife Sarah and has a baby boy Ernie and two dogs, Billy and Molly. In 2006 he was awarded an MBE.