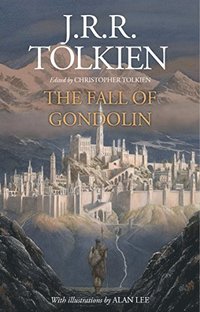 The Fall of Gondolin

av J R R Tolkien, Christopher Tolkien
(5 röster)  |  Läs 1 recension
Inbunden Engelska, 2018-08-30
199
Köp
Spara som favorit
Finns i lager! Skickas inom 1-2 vardagar.
Gratis frakt inom Sverige över 159 kr för privatpersoner.
Finns även som
Visa alla 7 format & utgåvor
In the Tale of The Fall of Gondolin are two of the greatest powers in the world. There is Morgoth of the uttermost evil, unseen in this story but ruling over a vast military power from his fortress of Angband. Deeply opposed to Morgoth is Ulmo, second in might only to Manwe, chief of the Valar. Central to this enmity of the gods is the city of Gondolin, beautiful but undiscoverable. It was built and peopled by Noldorin Elves who, when they dwelt in Valinor, the land of the gods, rebelled against their rule and fled to Middle-earth. Turgon King of Gondolin is hated and feared above all his enemies by Morgoth, who seeks in vain to discover the marvellously hidden city, while the gods in Valinor in heated debate largely refuse to intervene in support of Ulmo's desires and designs. Into this world comes Tuor, cousin of Turin, the instrument of Ulmo's designs. Guided unseen by him Tuor sets out from the land of his birth on the fearful journey to Gondolin, and in one of the most arresting moments in the history of Middle-earth the sea-god himself appears to him, rising out of the ocean in the midst of a storm. In Gondolin he becomes great; he is wedded to Idril, Turgon's daughter, and their son is Earendel, whose birth and profound importance in days to come is foreseen by Ulmo. At last comes the terrible ending. Morgoth learns through an act of supreme treachery all that he needs to mount a devastating attack on the city, with Balrogs and dragons and numberless Orcs. After a minutely observed account of the fall of Gondolin, the tale ends with the escape of Tuor and Idril, with the child Earendel, looking back from a cleft in the mountains as they flee southward, at the blazing wreckage of their city. They were journeying into a new story, the Tale of Earendel, which Tolkien never wrote, but which is sketched out in this book from other sources. Following his presentation of Beren and Luthien Christopher Tolkien has used the same 'history in sequence' mode in the writing of this edition of The Fall of Gondolin. In the words of J.R.R. Tolkien, it was 'the first real story of this imaginary world' and, together with Beren and Luthien and The Children of Hurin, he regarded it as one of the three 'Great Tales' of the Elder Days.
Visa hela texten

'Never did [Tolkien] write a more sustained account of battle. With dragons and fiery balrogs galore, the attack on Gondolin makes Peter Jackson's souped-up cinema battles look like tabletop games.' The Times 'The text is rife with references to characters and creatures that come to play a role in The Lord of the Rings... one passage in particular seems to set up one of the most famous scenes from the LOTR trilogy.' Time 'It's a load-bearing pillar in the grander narrative that eventually came to encompass better-known works. Tolkien explicitly expressed his wish later in life that the three Great Tales of Middle-earth's early days - The Children of Hurin, Beren and Luthien, and The Fall of Gondolin - along with The Lord of the Rings and other writings, should be considered as "one long Saga of the Jewels and the Rings".' Entertainment Weekly

J.R.R.Tolkien (1892-1973) was a distinguished academic, though he is best known for writing The Hobbit, The Lord of the Rings and The Silmarillion, plus other stories and essays. His books have been translated into over 60 languages and have sold many millions of copies worldwide.