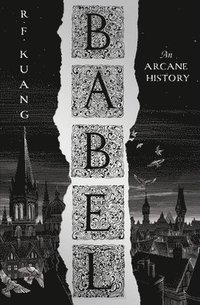 Or the Necessity of Violence: an Arcane History of the Oxford Translators' Revolution

Köp
Spara som favorit
Kan levereras innan julafton!
Finns även som
Visa alla 2 format & utgåvor
THE #2 SUNDAY TIMES AND #1 NYT BESTSELLER 'One for Philip Pullman fans' THE TIMES 'An ingenious fantasy about empire' GUARDIAN 'Fans of THE SECRET HISTORY, this one is an automatic buy' GLAMOUR 'Ambitious, sweeping and epic' EVENING STANDARD Traduttore, traditore: An act of translation is always an act of betrayal. Oxford, 1836. The city of dreaming spires. It is the centre of all knowledge and progress in the world. And at its centre is Babel, the Royal Institute of Translation. The tower from which all the power of the Empire flows. Orphaned in Canton and brought to England by a mysterious guardian, Babel seemed like paradise to Robin Swift. Until it became a prison... But can a student stand against an empire? An incendiary new novel from award-winning author R.F. Kuang about the power of language, the violence of colonialism, and the sacrifices of resistance. 'A masterpiece that resonates with power and knowledge. BABEL is a stark picture of the cruelty of empire, a distillation of dark academia, and a riveting blend of fantasy and historical fiction - a monumental achievement' Samantha Shannon, author of THE PRIORY OF THE ORANGE TREE
Visa hela texten

A BLACKWELL'S BOOK OF THE YEAR 'Absolutely phenomenal. One of the most brilliant, razor-sharp books I've had the pleasure of reading that isn't just an alternative fantastical history, but an interrogative one; one that grabs colonial history and the Industrial Revolution, turns it over, and shakes it out' Shannon Chakraborty, bestselling author of THE EMPIRE OF GOLD 'A masterpiece that resonates with power and knowledge. BABEL is a stark picture of the cruelty of empire, a distillation of dark academia, and a riveting blend of fantasy and historical fiction - a monumental achievement' Samantha Shannon, bestselling author of THE PRIORY OF THE ORANGE TREE 'A masterpiece. Through a meticulously researched and a wholly impressive deep dive into linguistics and the politics of language and translation, Kuang weaves a story that is part love-hate letter to academia, part scathing indictment of the colonial enterprise, and all fiery revolution' Rebecca Roanhorse, NYT bestselling author of BLACK SUN 'Kuang has outdone herself. BABEL is brilliant, vicious, sensitive, epic, and intimate; it's both a love letter and a declaration of war. It's a perfect book' Alix E. Harrow, bestselling author of A THOUSAND DOORS OF JANUARY 'A book that confirms Kuang as a major talent' SFX 'Brainy, brilliant, and fuelled by righteous anger, Babel is a towering tour-de-force of fantasy' DAILY MAIL 'BABEL has earned tremendous praise and deserves all of it. It's Philip Pullman's THE GOLDEN COMPASS by way of N.K. Jemisin's THE FIFTH SEASON: inventive and engaging, passionate and precise' NEW YORK TIMES 'A brilliant and often harrowing exploration of violence, etymology, colonialism, and the intersections that run between them. BABEL is as profound as it is moving' Alexis Henderson, author of THE YEAR OF THE WITCHING

Rebecca F. Kuang is a Marshall Scholar, Chinese-English translator, and the Astounding Award-winning and the Hugo, Nebula, Locus, and World Fantasy Award nominated author of the Poppy War trilogy and the forthcoming Babel. Her work has won the Crawford Award and the Compton Crook Award for Best First Novel. She has an MPhil in Chinese Studies from Cambridge and an MSc in Contemporary Chinese Studies from Oxford; she is now pursuing a PhD in East Asian Languages and Literatures at Yale.