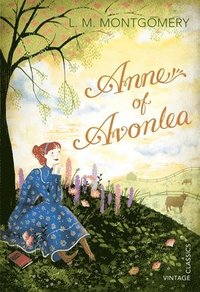 av L M Montgomery
Häftad Engelska, 2013-06-06
80
Köp
Spara som favorit
Skickas inom 5-8 vardagar.
Gratis frakt inom Sverige över 159 kr för privatpersoner.
Finns även som
Visa alla 8 format & utgåvor
You might think I'd have grown out of getting myself into scrapes now that I'm half past sixteen. But between being vexed by my freckles, taunted by a brazen Jersey cow and kept on my toes by the new twins, Dora and Davy, life at Green Gables is just as eventful as ever. I do try to be a little more grown-up now that I'm a school teacher. The other day I asked the class, 'If you had three candies in one hand and two in the other, how many would you have altogether?' One of my pupil's piped up, 'A mouthful.' Could you have kept a straight face?! Includes exclusive material: In 'The Backstory' you can find out about going to school in Avonlea and learn all about the real Green Gables Vintage Children's Classics is a twenty-first century classics list aimed at 8-12 year olds and the adults in their lives. Discover timeless favourites from The Jungle Book and Alice's Adventures in Wonderland to modern classics such as The Boy in the Striped Pyjamas and The Curious Incident of the Dog in the Night-Time.
Visa hela texten

Anne is a captivating heroine, a whirlwind of energy and good intentions * New Statesman * It's no stretch to suggest that Anne was the Harry Potter of her day -- Elizabeth Epperly

L. M. Montgomery, known as Maud, was born on Prince Edward Island, off the coast of Canada, in 1874. Maud's mother died when she was just a baby and so she had a rather unhappy childhood growing up in the care of her strict grandparents. She was just sixteen when she had her first poem published. As a young woman she worked as a teacher and although she didn't enjoy it much it gave her lots of time to write. Maud wrote hundred of short stories, poems and novels throughout her life but it was the hugely popular Anne of Green Gables and its sequels that made her famous. She died in 1942.