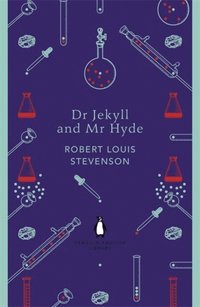 av Robert Louis Stevenson
Häftad Engelska, 2012-11-29
85
Köp
Spara som favorit
Skickas inom 5-8 vardagar.
Fri frakt inom Sverige över 159 kr för privatpersoner.
Finns även som
Visa alla 4 format & utgåvor
The Penguin English Library Edition of Dr Jekyll and Mr Hyde by Robert Louis Stevenson 'All human beings, as we meet them, are commingled out of good and evil: and Edward Hyde, alone in the ranks of mankind, was pure evil' Published as a 'shilling shocker', Robert Louis Stevenson's dark psychological fantasy gave birth to the idea of the split personality. The story of respectable Dr Jekyll's strange association with 'damnable young man' Edward Hyde; the hunt through fog-bound London for a killer; and the final revelation of Hyde's true identity is a chilling exploration of humanity's basest capacity for evil. This edition also includes Stevenson's chilling story 'The Bottle Imp'. The Penguin English Library - 100 editions of the best fiction in English, from the eighteenth century and the very first novels to the beginning of the First World War.
Visa hela texten

Robert Louis Stevenson was born in Edinburgh in 1850. The son of a prosperous civil engineer, he was expected to follow the family profession but was finally allowed to study law at Edinburgh University. Stevenson reacted forcibly against the Presbyterianism of both his city's professional classes and his devout parents, but the influence of Calvinism on his childhood informed the fascination with evil that is so powerfully explored in Dr Jekyll and Mr Hyde. Stevenson suffered from a severe respiratory disease from his twenties onwards, leading him to settle in the gentle climate of Samoa with his American wife, Fanny Osbourne. Treasure Island and The Ebb-Tide are also published in one edition in the Penguin English Library.