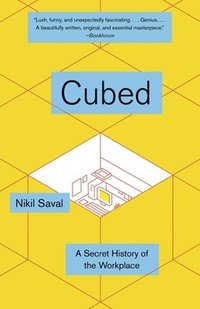 The Secret History of the Workplace

av Nikil Saval
Häftad Engelska, 2015-01-06
148
Köp
Spara som favorit
Finns även som
Visa alla 1 format & utgåvor
A"New York Times"Notable Book "Daily Beast "Best Nonfiction of 2014 "Inc. "Magazine's Most Thought-Provoking Books of the Year " Man is born free, but he is everywhere in cubicles. "How did we get from Scrooge s office to Office Space ? From bookkeepers in dark countinghouses to freelancers in bright cafes? What would the world be like without the vertical file cabinet? What would the world be like without the office at all? In "Cubed," Nikil Saval chronicles the evolution of the office in a fascinating, often funny, and sometimes disturbing anatomy of the white-collar world and how it came to be the way it is. Drawing on the history of architecture and business, as well as a host of pop culture artifacts from "Mad Men" to Dilbert (and, yes, "The Office") and ranging in time from the earliest clerical houses to the surprisingly utopian origins of the cubicle to the funhouse campuses of Silicon Valley, "Cubed" is an all-encompassing investigation into the way we work, why we do it the way we do (and often don t like it), and how we might do better."
Visa hela texten

Praise for "Cubed" ..". Excellent ... fresh and intellectually omnivorous ... Saval is a vigorous writer, and a thoughtful one. What puts him above the rank of most nonfiction authors, even some of the better ones, is that he doesn t merely present information. He turns each new fact over in his mind, right in front of you, holding it to the light." Dwight Garner, "T""he New York Times"""Cubed" is...a pleasure to read: beautifully written and clearly organized. Since many Americans now, women as well as men, spend more than half their waking hours at work, it's also an important exploration." Richard Sennett, "T""he New York Times Book Review""Lush, funny, and unexpectedly fascinating ... [G]enius ..."Cubed"stands as one of those books readers can open to any page and find the kind of insight they ll want to yank strangers out of their bus or subway seats and repeat ...[A] beautifully written, original, and essential masterpiece." Jerry Stahl, "Bookforum""There are a lot of books about work... but "Cubed" offers something different: an entertaining look at the history of the modern worker that the modern worker can actually learn from."" "Rosecrans Baldwin, NPR "Impressive... Beautifully written... delightfully readable..."" "Martin Filler, "The New York Review of Books" "Thorough and diligent...Saval works hard, and effectively, to demonstrate how the evolution of workspaces paralleled social shifts in the workforce that we re still living out....Savalis a tireless researcher, and he turns phrases with a flair that would get an Organization Man fired."" "Jennifer Howard, "The Washington Post Book World"..". Cleverly pieced together...subtle and sophisticated." Jill Lepore, " The New Yorker""Nikil Saval's new book, "Cubed: A Secret History of the Workplace," is a fascinating guide to the intellectual history of the American office. Part cultural history, part architectural analysis and part management theory with some labor economics, gender studies and pop culture thrown in for good measure the book is a smart look at the evolution of the place where we spend so much of our lives."" The Washington Post" "In his first book, Saval sets out to chronicle the evolution of the American office from airless prison to what it is today, reflecting upon the transformation of the office worker from emasculated novelty to unremarkable figure of ubiquity. To accomplish this, he synthesizes an impressive number of books, films, articles, and first-person accounts relating to the daunting number of historical forces and ideologies that have shaped white-collar work: architecture, philosophy, labor disputes, class conflict, the women s movement, and technological advances, just to name a few. Saval considers each of them, forming a cogent and compelling narrative that could very easily have been scattered or deathly dull. To keep things lively, Saval deploys deft analytical skills and a tone that s frequently bemused, making difficult and important concepts palatable to the casual reader." "The Boston Globe" "Over the past week, as I've been carrying around a copy of Nikil Saval's "Cubed: A Secret History of the Workplace," I've gotten some quizzical looks. 'It's a history of the office, ' I'd explain, whereupon a good number of people would respond, 'Well, that sounds boring.' It isn't. In fact, "Cubed" is anything but... Saval's book glides smoothly between his two primary subjects: the physical structure of offices and the social institutions of white-collar work over the past 150 years or so. "Cubed"encompasses everything from the rise of the skyscraper to the entrance of women in the workplace to the mid-20th-century angst over grey-flann

Nikil Saval, an editor of n+1, lives in Philadelphia.