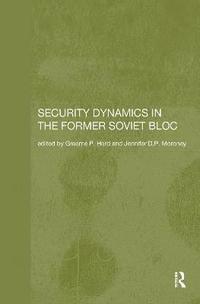 'This book offers a good resource allowing a broader understanding of how and why the republics of the former USSR have developed in different ways. It is easy to read and the layout and content of the chapters is well structured, encompassing a comprehensive and coherent analysis.' - Journal of International Relations and Development

Dr Graeme P. Herd is a Professor of Civil-Military Relations at the George C. Marshall European Centre for Security Studies, Garmisch-Partenkirchen, Germany. He has published extensively on aspects of post-Soviet security politics in a variety of journals. His latest book is Russia and the Regions: Strength Through Weakness (London: RoutledgeCurzon, 2003). Dr Jennifer D.P. Moroney is at RAND Washington D.C. She was recently an Associate at DFI Government Services and an Adjunct Professor and Research Associate in the Elliott School of International Affairs, George Washington University, in Washington DC. She has written and published widely on the politics and security of the former Soviet Union, particularly Ukraine and Central Asia, defense and military relations between NATO or the US and Eurasia, and the status of the NATO aspirants relative to NATO enlargement.

Part I: Introduction 1. From Soviet bloc to democratic security building? Part II: Baltic Security Politics 2. The post-Prague strategic orientation of the Baltic States 3. Security: lynchpin of Baltic cooperation 4. Russia's Baltic Policy in an era of EU integration Part III: Interstate Relations in the Core CIS 5. The 'normalisation' of Russian Foreign Policy: the role of pragmatic nationalism and big business 6. Border security implications for dual enlargement: a comparison of Russia and Ukraine 7. Imperialism to Realism: the role of the West in Russian foreign policy towards Ukraine 8. The union of Belarus and Russia: The role of NATO and the EU Part IV: Security Politics in the CIS Periphery 9. Security concerns in post-Soviet Moldova 10. Security Regime building in the South Caucasus 11. Western approaches to security cooperations with Central Asian states: advancing the Euro-Atlantic security order in Eurasia Part V: Security Dynamics 12. Characterising (in)Security in Eurasia Bibliography Index