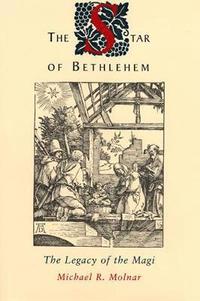 The Star of Bethlehem

The Legacy of the Magi

av Michael R Molnar
Häftad Engelska, 2013-09-20
227
Köp
Spara som favorit
Could the $50 purchase of an ancient coin by a Rutgers astronomer have unlocked the mystery of the Christmas Star? For years, scientists have looked, with little success, to astronomical records for an explanation of the magical star that guided the Magi to Christ's manger. Intrigued by the image he found on the latest addition to his coin collection, Michael Molnar thought there might be more to learn by looking, instead, at the teachings of ancient astrologers. Molnar argues in his book that the Star of Bethlehem was not a star at all, but rather a regal portent centering around the planet Jupiter that was eclipsed by the moon. He bases this theory on the actual beliefs of astrologers, such as the Magi, who lived around the time of Christ. Molnar found some intriguing clues to the mystery while researching the meaning of astrological symbols he found an ancient coin, which bore the image of Aries looking back at a star. He found that Aries was a symbol of Judea at the time, and that ancient astrologers believed that a new king would be born when the moon passed in front of Jupiter. Molnar wondered, could the coin have been issued as a response to the Great Messianic Portent, the Star of Bethlehem? To match the story of the appearance of the Christmas star, Molnar also knew the event had to happen when Jupiter was "in the east." Using these criteria and a computer program, he was able to chart an eclipse of Jupiter in Aries on April 17, 6 B.C., a day when Jupiter was precisely "in the east," which confirmed his theory. Moreover, he found that a Roman astrologer described the conditions of that day as fitting the birth of a "divine and immortal" person. According to Harvard University Professor Owen Gingerich, "this is the most original and important contribution of the entire 20th century" about the Magi's star. Using clues from astronomy, astrology, and history, Molnar has created a provocative, fascinating theory on the Christmas Star. He weaves together an intriguing scientific detective story which resolves one of the world's greatest mysteries: The Star of Bethlehem at the birth of Christ.
Visa hela texten

"[The Star] was an alignment of stars and planets that ancient astrologers would have recognized as significant. No portent would have excited greater expectations of a divine birth in Judea . . . than a lunar eclipse of Jupiter (the 'kings' planet) in the constellation Aries. . . . [A] fresh theory providing new scientific support for the biblical story, making the 'star of wonder' a little less of a mystery."--U.S. News and World Report "And because sophisticated computer calculations reveal that such an eclipse did occur on April seventeenth in the year 6 B.C., Molnar fixes this as the celestial event that signaled the Christ child's birth. . . . The uncanny fit of all the ancient and modern pieces of this puzzle makes for a highly persuasive argument."--Booklist "In support of an original interpretation of the Star, Molnar has assembled an impressive range of astrological and numismatic data, much of which will be new even to expert readers."--Virginia Trimble "author of Visit to a Small Universe " "Michael Molnar offers the first revolution in Star of Bethlehem research since Kepler's days. Molnar's big advance comes by considering what the Magi themselves would have deemed important. . . . Don't buy any other book on the Star of Bethlehem, because the old astronomical views are guaranteed to be irrelevant. Second, the new astrological paradigm forces the realization that astrology was an important force in historical times so that the disregard of the topic by most historians is blatant chauvinism. Third, the existence of a stunning astrological horoscope for April 17, 6 B.C, announcing the birth of a great king in Judea will now force scholars of religion to reconcile the event with their own beliefs."--Sky & Telescope "Mr. Molnar takes a different tack, arguing that [the star of Bethlehem] was not an astronomical event that guided the wise men on their journey, but an astrological one. He may not have the best theory, but he certainly has the best story."--Economist "The explanation that appears in Molnar's new book . . . unfolds like a detective story: a clever scientific analysis woven into a cultural and historical fabric. . . . Molnar reports that the Magi considered the planet Jupiter to be the royal star. He argues that their astrological readings predicted that on April 17, 6 B.C. a remarkable alignment would occur when the sun passed into the northern sky, entering the constellation of Aries. Jupiter, Saturn, the sun and moon would appear briefly in close alignmentuan event that occurs no more than once a lifetime."--Nation "This book has stunning new insight and approach, which finally gives a confident answer to a question that has fascinated all Christians through the ages."--Bradley E. Schaefer "Yale University " "Molnar's The Star of Bethlehem is a fascinating contribution to the immense literature that attempts to come to terms with the Christmas Star represented in Matthew's Gospel. In my opinion, this book is the most original and important contribution of the entire twentieth century on the thorny question of how events recorded there should be interpreted."--Owen Gingerich "Harvard Smithsonian Center for Astrophysics "

MICHAEL R. MOLNAR, an astronomer, is retired from the Physics and Astronomy Department at Rutgers University.