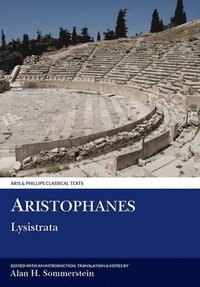 Häftad Grekiska (klassisk (-1453), 1998-01-01
319
Köp
Spara som favorit
Lysistrata is the third and last of Aristophanes' peace plays. It is a dream of peace, of how the women could help to achieve an honourable settlement, conceived when Athens was going through its blackest, most desperate crisis since the Persian War. Though in modern times this is perhaps the most popular of his works, it has never before had an English translation that aims to be reliable in detail and that is fully annotated. The Greek text is based on a fuller body of evidence than any previous edition. It is astonishing to think that this play was first performed over 2,400 years ago, because of all Aristophanes' great comedies, Lysistrata seems to speak most clearly to our own age. It could perhaps be described as the world's first, and indeed still the world's greatest feminist drama. This second edition was published in 1998, and revised with addenda and updated bibliography in 2007. [Text with facing translation, commentary and notes.]
Visa hela texten

'The scholarship and broad appeal of Sommerstein's Lysistrata will commend it to individuals and libraries alike.' Classical World

Alan H. Sommerstein is Professor of Greek and Director for Ancient Drama and its Reception, University of Nottingham, and editor of the celebrated complete edition of Aristophanes volumes in the Aris & Phillips Classical Texts series. His many other publications include Aeschylean Tragedy (1996), an edition of Aeschylus Eumenides (1989), Greek Drama and Dramatists (2002) and Sophocles: Selected Fragmentary Plays Volumes 1 and 2 (2006, 2011) in this series.