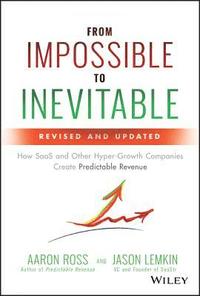 From Impossible to Inevitable

How SaaS and Other Hyper-Growth Companies Create Predictable Revenue

av Aaron Ross, Jason Lemkin
Inbunden Engelska, 2019-07-09
219
Köp
Spara som favorit
Kan tyvärr inte längre levereras innan julafton.
Finns även som
Visa alla 2 format & utgåvor
Break your revenue records with Silicon Valley's "growth bible" "This book makes very clear how to get to hyper-growth and the work needed to actually get there" Why are you struggling to grow your business when everyone else seems to be crushing their goals? If you needed to triple revenue within the next three years, would you know exactly how to do it? Doubling the size of your business, tripling it, even growing ten times larger isn't about magic. It's not about privileges, luck, or working harder. There's a template that the world's fastest growing companies follow to achieve and sustain much, much faster growth. From Impossible to Inevitable details the hypergrowth playbook of companies like Hubspot, Salesforce.com (the fastest growing multibillion dollar software company), and EchoSign-aka Adobe Document Services (which catapulted from $0 to $144 million in seven years). Whether you have a $1 billion or a $100,000 business, you can use the same insights as these notable companies to learn what it really takes to break your own revenue records. Pinpoint why you aren't growing faster Understand what it takes to get to hypergrowth Nail a niche (the #1 missing growth ingredient) What every revenue leader needs to know about building a scalable sales team There's no time like the present to surpass plateaus and get off of the up-and-down revenue rollercoaster. Find out how now!
Visa hela texten

Aaron Ross founded PredictableRevenue.com, a consulting company that helps b2b companies triple sales growth & create self-managing sales teams. Aaron is also the founder of PebbleStorm, which is helping 100 million people "make money through enjoyment" by combining happiness and money. Jason Lemkin is a Managing Director of Storm Ventures. At Storm Ventures, Jason focuses exclusively on early-stage SaaS/enterprise start-ups and helping them scale. He has led and/or sourced Storm's investments in next-generation SaaS leaders including Talkdesk, Algolia, Pipedrive, Parklet, RainforestQA and Guidespark, as well as his own Storm-backed company, EchoSign (acquired by Adobe). He also serves an Advisory Board Member or investor in other emerging SaaS leaders, including Convertro (acquired by AOL), BetterWorks, AnyPerk, Retention Science, Showpad, FrontApp, Influitive, and Greenhouse.io. Jason is an acknowledged thought leader in SaaS through his creation of theSaaStr community for SaaS executives and founders.

Preface: Systematizing Success xiii Lessons from the World's Fastest-Growing Companies xiii Part I Nail a Niche 1 "Niche" Doesn't Mean Small 2 Are You Sure You're Ready to Grow Faster? 2 How to Know If You've Nailed a Niche 4 Achieve World Domination One Niche at a Time 6 The Arc of Attention 7 2 Signs of Slogging 12 Are You a Nice-to-Have? 12 Big Companies Suffer, Too 15 Case Study: Where Aaron Went Wrong 16 Your Current Strength Can Be a Future Weakness 21 3 How to Nail It 23 Where Can You Be a Big Fish in a Small Pond? 23 Work through the Niche Matrix 25 Case Study: How Twilio Nailed a Billion-Dollar Niche by Walking in Its Customers' Shoes 31 The 20-Interview Rule 36 4 Your Pitch 39 If You Were a Radio Station, Would Anyone Tune In? 39 Elevator Pitches Are Always Frustrating 41 They Don't Care about "You": Three Simple Questions 43 Part II Create Predictable Pipeline Introduction: Lead Generation Absolves Many Sins 46 5 Seeds-Customer Success 50 How to Grow Seeds Predictably 51 Case Study: How Gild Dropped Monthly Churn from 4 to 1 56 Case Study: Customer Service Excellence at Topcon 58 6 Nets-Marketing 61 Three Uncommon Approaches of Hypergrowth CMOs 63 The Forcing Function Your Marketing Leader Needs: A "Sales Qualified Lead Commit" 70 Corporate Marketing versus Demand Generation 71 How Inbound Changed in 10 Years Between Scaling Marketo to $100M+ and Founding Engagio 72 Heroic Marketing: When You Have No Money and Little Time 76 7 Spears-Outbound Prospecting 80 Where Outbound Works Best-and Where It Fails 83 Outbound Lessons Learned Since Predictable Revenue Was Published 85 Case Study: Outbound's Role in Acquia's $100 Million Trajectory 87 Case Study: How Sagemount Triples the Value of a Company in Three Years 89 Case Study: How Zuora Drives 60%-Plus of Its Growth by Outbound, Even When Accounts Need Nurturing for Years 97 Build an Outbound Program Right the First Time 104 Have You Been Too Successful at Inbound? 110 8 What Executives Miss 114 Pipeline Creation Rate: Your #1 Leading Metric 114 The 15/85 Rule: Early Adopters and Mainstream Buyers 116 Why You're Underestimating Customer Lifetime Value 119 Part III Make Sales Scalable 9 Learn from Our Mistakes 123 Growth Creates More Problems Than It Solves-But They Are Better Problems 123 Top 12 Mistakes in Building Sales Teams 124 Advice from the VP Sales behind LinkedIn and EchoSign 126 10 Specialization: Your #1 Sales Multiplier 129 Why Salespeople Shouldn't Prospect 129 Case Study: How Clio Restructured Sales in Three Months 132 Can You Be Too Small, or Too Big, to Specialize? 134 Specialization: Two Common Objections 136 Specialization Snapshot at Acquia 137 11 Sales Leaders 139 The #1 Mis-Hire Is the VP/Head of Sales 139 The Right VP Sales for Your Stage 140 Ten Favorite Interview Questions 143 12 Hiring Best Practices for Sales 146 If You're a Startup: Four Phases of Hiring Your First Sales Team 146 Simple Hiring Tricks 149 When Doing Something New, Start with Two 150 The $100 Million HubSpot Sales Machine: Recruiting and Coaching Essentials 152 Case Study: How to Cut Down on Wasted Interviewing 154 13 Scaling the Sales Team 157 If You're Churning More Than 10% of Your Salespeople, They Aren't the Problem 157 Three Ways to Cut Churn and Increase Sales Motivation While You Scale 160 Advice to CEOs: Put Nonsales Leaders on Variable Comp Plans, Too 164 Are Your Enterprise Deals Taking Forever? 166 Five Key Sales Metrics (with a Twist) 168 14 For Startups Only 171 Every Tech Company Should Offer Services 171 What Jason Invests In, and Do You Need to Raise Money to Scale? 173 What the Headcount of a 100-Person SaaS Company Looks Like 176 Part IV Double Your Deal Size 15 Deal Size Math 182 You Need 50 Million Users to Make Freemium Work 182 Small Deals Get You Started, Big Deals Drive