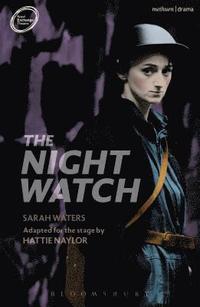 av Sarah Waters
Häftad Engelska, 2016-05-19
229
Köp
Spara som favorit
Skickas inom 5-8 vardagar.
Fri frakt inom Sverige för privatpersoner.
Finns även som
Visa alla 4 format & utgåvor
I thought everything would change, after the war. And now, no one even mentions it. It is as if we all got together in private and said whatever you do don't mention that, like it never happened. It's the late 1940s. Calm has returned to London and five people are recovering from the chaos of war. In scenes set in a quiet dating agency, a bombed-out church and a prison cell, the stories of these five lives begin to intertwine and we uncover the desire and regret that has bound them together. Sarah Waters's story of illicit love and everyday heroism takes us from a dazed and shattered post-war Britain back into the heart of the Blitz, towards the secrets that are hidden there. Olivier-nominated playwright Hattie Naylor has created a thrilling and theatrically inventive adaptation of a great modern novel. The stage adaptation of The Night Watch was premiered at the Royal Exchange Theatre, Manchester, on 16 May 2016.
Visa hela texten

In Hattie Naylor's text, the relationship between father and son shines so brightly . . . that it suffuses the whole play with a rich, glowing emotional depth * Scotsman on "Going Dark" * Hattie Naylor brings a modern adaptation of the French fable to the stage in order to question our current complicity with the objectification of women . . . poetic in style and well-executed * Whatsonstage on "Bluebeard" * Hattie Naylor's writing beautifully conveys the incredible way the boy and dogs connected to each other * Daily Telegraph on "Ivan and the Dogs" *

Hattie Naylor has won several national and international awards for her plays and has had a number of her stories broadcast on Radio 4, including Mathilde, Solaris, J'Accuse and The Making of Ivan the Terrible. Theatre and opera work include Mother Savage for Travelling Light, the opera Odysseus Unwound for Tete a Tete, The Nutcracker for Theatre Royal Bath, Ivan and the Dogs for the Soho Theatre, Going Dark for Fuel and Bluebeard for Gallivant. She also teaches scriptwriting on the MA in Creative Writing at Bath Spa University. Sarah Waters has written six novels: Tipping the Velvet (1998, Betty Trask Award); Affinity (1999, Somerset Maugham Award, the Sunday Times Young Writer of the Year Award); Fingersmith (2002, shortlisted for the Man Booker Prize and the Orange Prize, and winner of the South Bank Show Award for Literature and the CWA Historical Dagger); The Night Watch (2006, shortlisted for the Orange Prize and the Man Booker Prize); The Little Stranger (2009, shortlisted for the Man Booker Prize) and The Paying Guests (2014, shortlisted for the Baileys Women's Prize for Fiction). Several of her novels have been adapted for television and the stage.