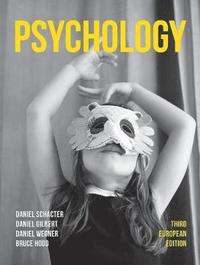 av Daniel Schacter, Daniel Gilbert, Daniel Wegner, Bruce Hood
Häftad Engelska, 2019-10-30
715
Köp
Spara som favorit
This globally-focused and renowned textbook spans the entire discipline of psychology - from the fundamental principles of psychology as a science, to more nuanced approaches in core disciplines such as cognitive, developmental, social and personality psychology. Woven together with engaging features, research boxes and activities that will help students to both think like a scientist and stretch their imagination. In-depth and yet written with irresistible enthusiasm and humour by a world-renowned team of psychologists and researchers, this book is a complete course companion for all undergraduate psychology students. It is both engaging and yet scientifically sound and theoretically rigorous. The only book students need as they begin their study of psychology.
Visa hela texten