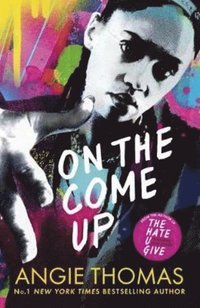 On the Come Up

av Angie Thomas
Häftad Engelska, 2019-02-07
95
Köp
Spara som favorit
Finns i lager! Skickas inom 1-2 vardagar.
Gratis frakt inom Sverige över 159 kr för privatpersoner.
Finns även som
Visa alla 4 format & utgåvor
No. 1 New York Times bestseller "[An] exuberant, exquisitely intimate novel." The New York Times "Passionate and powerful." Metro "Pure magic." The Observer Movie rights sold to Fox 2000; George Tillman Jr. to direct The award-winning author of The Hate U Give returns with a powerful story about hip hop, freedom of speech - and fighting for your dreams, even as the odds are stacked against you. Bri wants to be one of the greatest rappers of all time. As the daughter of an underground hip hop legend who died right before he hit big, Bri's got massive shoes to fill. But when her first song goes viral for all the wrong reasons, Bri finds herself at the centre of controversy and portrayed by the media as more menace than MC. And with an eviction notice staring her family down, Bri no longer just wants to make it - she has to. Even if it means becoming the very thing the public has made her out to be.
Visa hela texten

"Thomas, a former rapper herself, packs so much into these 448 pages, but they fly along with the agility of one of Bri's freestyles." * The Times, Children's Book of the Week * "There is no second-book syndrome here. Unflinching, honest and brimming with humanity, Thomas writes with confidence and conviction about kids seldom seen in literature... Bri's frustrated, angry lyrics are pure magic." * The Observer * "The phrase "voice of a generation" is surely one of the most overused in popular culture. Angie Thomas, however, is one of the rare authors for whom it rings true... Her second, On the Come Up, proves that success was no fluke." * i newspaper * "Best for: Making you laugh, cry and cheer out loud. . . an acute dissection of the way black girls are objectified and stereotyped by today's society." * i newspaper * "When THUG came out, Thomas was branded "the voice of a generation"; On the Come Up proves that those accolades were not premature. Clever, thoughtful and thoroughly addictive, it deserves to be one of the biggest hits of the year." * i newspaper *

Angie Thomas is the author of the hugely critically acclaimed and bestselling The Hate U Give. She was born and raised in Jackson, Mississippi. A former teen rapper, she is the recipient of a Walter Dean Myers Grant, awarded by the We Need Diverse Books campaign. This is her second novel. You can find her on Twitter: @acthomasbooks or visit her website, angiethomas.com.