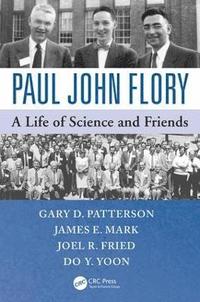 A Life of Science and Friends

av Gary D Patterson, James E Mark, Joel R Fried, Do Yoon
Häftad Engelska, 2015-07-27
439
Köp
Spara som favorit
Skickas inom 5-8 vardagar.
Fri frakt inom Sverige för privatpersoner.
Finns även som
Visa alla 2 format & utgåvor
Paul John Flory: A Life of Science and Friends is the first full-length treatment of the life and work of Paul John Flory, recipient of the Nobel Prize in chemistry in 1974. It presents a chronological progression of his scientific, professional, and personal achievements as recounted and written by his former students and colleagues. This book covers the span of Flory's life, including a family history and reflections on the marks he left on the lives of various individuals within the scientific community. He played a major role in the consolidation of the macromolecular paradigm in chemistry, physics, and materials science. His influence permeates virtually every aspect of polymer science. The book includes an extensive collection of personal remembrances telling the circumstances under which colleagues worked with Flory, discussing their joint work, and assessing Flory's place in polymer science, chemistry, and world science. The contributors memorialize Flory for more than his scientific and technical contributions. Several chapters are written by living friends who reflect upon his impact on their work and careers. He also played a role in human rights within the scientific community, making efforts to liberate scientists who lived and worked behind the Iron Curtain, particularly in the Soviet Union. Paul John Flory: A Life of Science and Friends illustrates an example of an individual of scientific and personal excellence. His living friends and colleagues believe his story must be told. In telling it and making it available for future generations, his closest friends and colleagues ensure his continued inspiration to people in and outside laboratories worldwide.
Visa hela texten

Gary D. Patterson, PhD, is professor of chemical physics and polymer science at Carnegie Mellon University. He earned his PhD in physical chemistry from Stanford University working with Paul John Flory. He was a member of technical staff in the Chemical Physics Department of AT&T Bell Laboratories from 1972 to 1984 and received the National Academy of Sciences Award for Initiatives in Research in 1981 for his work on the structure and dynamics of amorphous polymers using light scattering. He is a Fellow of the American Physical Society and the Royal Society of Chemistry. He has published more than 100 papers in technical journals such as Macromolecules, the Journal of Chemical Physics, and the Journal of Polymer Science. He is the author of Physical Chemistry of Macromolecules (CRC Press, 2007). He is now a chemical historian and has published many articles and books on the history of polymer science and the history of physical chemistry. He is the Chair of the History of Chemistry Division of the American Chemical Society. He has been associated with the Chemical Heritage Foundation since 2004 and is now the Chair of the Heritage Council and is a member of the Board of Directors. James E. Mark, PhD, is professor of chemistry emeritus at the University of Cincinnati. He earned his PhD in physical chemistry from the University of Pennsylvania. He fell in love with polymer science while working with Tom Fox at Rohm and Haas during a break in his undergraduate years. He followed this star as a postdoctoral fellow with Paul Flory at Stanford. He rose to the position of professor at the University of Michigan (1972) before being appointed to the University of Cincinnati in 1977. He was the director of the Polymer Research Center and a distinguished research professor. He has published extensively in the areas of physical chemistry of macromolecules, especially rubber. He has been honored with many awards including the Charles Goodyear Medal of the Rubber Division of the American Chemical Society (ACS), the ACS Applied Polymer Science Award, and the Flory Polymer Education Award of the ACS Division of Polymer Chemistry. He is one of the editors of the Selected Works of Paul Flory, and has done more than anyone in contributing to the science associated with Paul Flory. Joel R. Fried, PhD, is currently professor and chair of the Department of Chemical Engineering at the University of Louisville. Prior to this appointment, he was professor and chair of the Department of Chemical and Biomedical Engineering at Florida State and was professor of Materials Engineering and the Wright Brothers Institute endowed chair in Nanomaterials at the University of Dayton. He is also professor emeritus and Fellow of the Graduate School at the University of Cincinnati where he was professor and head of the Department of Chemical Engineering and director of the Polymer Research Center. He has authored more than 150 journal articles, several patents, and book chapters and is the author of Polymer Science and Technology (3rd edition, Prentice-Hall). He earned his PhD degree in polymer science and engineering from the University of Massachusetts Amherst. Do Y. Yoon, PhD, is consulting professor of chemical engineering at Stanford University since 2012. He earned his PhD in polymer science and engineering from the University of Massachusetts Amherst, working with Richard S. Stein (1973). He did his postdoctoral study with Paul J. Flory in the chemistry department of Stanford University (1973-1975). He then worked at the IBM Research Laboratory in San Jose as research staff member and manager of Polymer Physics Group (1975-1999). From 1999 to 2012, he was professor of chemistry at Seoul National University. He was also visiting professor at the Max Planck Institute for Polymer Research (2000-2006), the National Institute of Standards and Technology (2006-2012), and the University of Bayreuth (2012). He has published about 250 research papers, was el