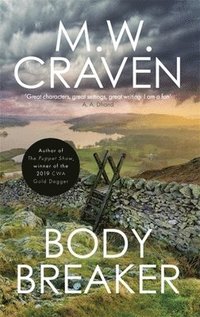 av M W Craven
(1 röst)
Häftad Engelska, 2020-01-09
95
Köp
Spara som favorit
Finns även som
Visa alla 1 format & utgåvor
'This is high quality crime writing' A A Dhand The second dark and twisted thriller in the Avison Fluke series by M. W. Craven, the acclaimed author of The Puppet Show. Investigating how a severed hand ends up on the third green of a Cumbrian golf course is not how Detective Inspector Avison Fluke has planned to spend his Saturday. So when a secret protection unit from London swoops in quoting national security, he's secretly pleased. But trouble is never far away. A young woman arrives at his lakeside cabin with a cryptic message: a code known to only a handful of people and it forces Fluke back into the investigation he's only just been barred from. In a case that will change his life forever, Fluke immerses himself in a world of New Age travellers, corrupt cops and domestic extremists. Before long he's alienated his entire team, has been arrested under the Terrorism Act - and has made a pact with the Devil himself. But a voice has called out to him from beyond the grave. And Fluke is only getting started... Praise for M. W. Craven: 'Dark, sharp and compelling' PETER JAMES 'Fantastic' MARTINA COLE 'Britain's answer to Harry Bosch' MATT HILTON 'Thrilling' MICK HERRON 'Brilliantly inventive' WILLIAM SHAW 'A powerful thriller from an explosive new talent' DAVID MARK
Visa hela texten

Praise for M. W. Craven: Dark, sharp and compelling -- Peter James Fantastic -- Martina Cole A thrilling curtain-raiser for what looks set to be a great new series -- Mick Herron A powerful thriller from an explosive new talent. Tightly plotted, and not for the faint-hearted! -- David Mark A book that shines with tension, wit and invention -- William Shaw Satisfyingly twisty and clever and the flashes of humour work well to offer the reader respite from the thrill of the read -- Michael J. Malone Mike Craven is a forceful new voice in British crime fiction -- Caro Ramsay Washington Poe is a name destined to be spoken by crime fiction enthusiasts everywhere: Britain's answer to Harry Bosch. The Puppet Show is a wickedly, twisting and turning, mystery that will have readers breathlessly turning the pages until the final shocking conclusion -- Matt Hilton A brilliant start to what promises to be a fantastic series; get it now or kick yourself for missing out -- Graham Smith I cannot recall the last time I binge read a novel in 36 hours . . . truly mind-blowing -- A. A. Dhand I loved this book! -- Jo Jakeman Fluke is a magnificent creation . . . Highly entertaining reading . . . Very pacey, hugely interesting, never a dull moment and with characters and a conclusion I could enjoy * Mystery People * Dark, thrilling and unputdownable with sharply drawn characters that stride off the page -- Victoria Selman A fantastic read which draws you in from the first line. Its narrative is written with such skill that I challenge any reader to deny its siren call . . . Craven's plotting kept me guessing . . . With sumptuous prose, great characters and a labyrinthine plot, Body Breaker has everything you need in a police thriller * CrimeSquad *

Multi-award winning author M. W. Craven was born in Carlisle but grew up in Newcastle. He joined the army at sixteen, leaving ten years later to complete a social work degree. Seventeen years after taking up a probation officer role in Cumbria, at the rank of assistant chief officer, he became a full-time author. The Puppet Show, the first book in his Cumbria-set Washington Poe series, was published by Little, Brown in 2018 and went on to win the Crime Writers' Association Gold Dagger in 2019. It has now been translated into twenty-one languages. Black Summer, the second in the series, was longlisted for the 2020 Gold Dagger as was book three, The Curator. The fourth in the series, Dead Ground, was published last June, became an instant Sunday Times bestseller and won the 2022 Ian Fleming Steel Dagger.The latest book in the series, The Botanist, published in June, also became an instant Sunday Times bestseller. Website: mwcraven.com Twitter: @MWCravenUK