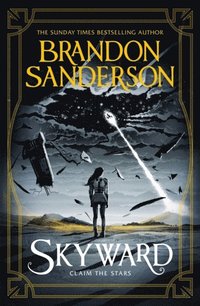 av Brandon Sanderson
(2 röster)
Häftad Engelska, 2019-09-19
110
Köp
Spara som favorit
Finns även som
Visa alla 2 format & utgåvor
Spensa's world has been under attack for hundreds of years. An alien race called the Krell leads onslaught after onslaught from the sky in a never-ending campaign to destroy humankind. Humanity's only defense is to take to their ships and fight the enemy in the skies. Pilots have become the heroes of what's left of the human race. Spensa has always dreamed of being one of them; of soaring above Earth and proving her bravery. But her fate is intertwined with her father's - a pilot who was killed years ago when he abruptly deserted his team, placing Spensa's chances of attending flight school somewhere between slim and none. No one will let Spensa forget what her father did, but she is still determined to fly. And the Krell just made that a possibility. They've doubled their fleet, making Spensa's world twice as dangerous . . . but their desperation to survive might just take her skyward . . . Praise for Brandon Sanderson's #1 New York Times Bestselling Reckoners series: 'Another win for Sanderson . . . he's simply a brilliant writer' Patrick Rothfuss 'Action-packed' EW.com 'Compelling . . . Sanderson uses plot twists that he teases enough for readers to pick up on to distract from the more dramatic reveals he has in store' AV Club
Visa hela texten

another brisk YA fantasy from Sanderson - inventive, action-stuffed and surprising until the end * SFX * Secrets intensify this ripping yarn, which is crammed with peril, thrills and snappy dialogue * Daily Mail * Steelheart is the literature equivalent of a blockbuster; episodic and fast-paced with surprises around every turn. * SCI FI NOW * Skyward is an adventure and a half that you won't want to miss. Even hardcore Cosmere fans will enjoy the special mix of fantasy and sci-fi that unfolds as you watch Spensa learn what it means to be truly brave. * TOR.COM * All the main characteristics of a Sanderson novel from a writer at the top of his game. * FANTASY BOOK REVIEW * Full of action * THE SUN * With this action-packed trilogy opener, Sanderson offers up a resourceful, fearless heroine and a memorable cast-including a strangely humorous, mushroom-obsessed robot-set against the backdrop of a desperate conflict. As the pulse-pounding story intensifies and reveals its secrets, a cliffhanger ending sets things up for the next instalment. * PUBLISHERS WEEKLY * as always, Brandon Sanderson creates a unique and interesting universe we get to explore alongside the protagonist...a fun, action packed ride for those of us who remain a child at heart. * Best Fantasy Books * The world of The Reckoners is suddenly presented in all its glory. It's an incredibly vibrant setting that showcases the entire breadth of Sanderson's talent. Expect to finish this one in single sitting. * Upcoming 4 Me * This deeply entertaining first episode in a series is for fans of aerial warfare stories in which the characters are as well-devised as the machines. * MORNING STAR * Startling revelations and stakes-raising implications ... Sanderson plainly had a ball with this nonstop, highflying opener, and readers will too * Kirkus (starred review) * The stories are complex, fascinating, and filled to the brim with three-dimensional characters * Fantasy Book Review * Firefight is a visual, almost cinematic novel * Buzzy Mag * Firefight is a rollercoaster ride of action, entertainment, and humour * Smash Dragons * Firefight is filled with a spine-tingling adventure and heart-racing action that promises to satisfy fans both new and old * Fantasy Book Critic * Steelheart is the literature equivalent of a blockbuster; episodic and fast-paced with surprises around every turn. * SCI FI NOW * A terrifically tall tale, packaging the superhero action into compelling, punchy chapters that keep you reading. It's a fast, feisty read with characters that are skillfully drawn, assassinations, gunfights, physics bending motorcycle chases and a world you can't wait to hear more about. * SFX * Full of action * THE SUN *

Brandon Sanderson was born in Nebraska in 1975. Since then he has written, amongst others The Mistborn books and begun the internationally bestselling Stormlight Archive. He was also chosen by Robert Jordan's family to complete Jordan's Wheel of Time Sequence. He lives in Utah. Visit his website at http://www.brandonsanderson.com, follow him on Twitter at https://twitter.com/BrandSanderson and like him on Facebook at https://www.facebook.com/BrandSanderson. Read his blogs at http://mistborn.blogspot.co.uk andhttp://mistborn.livejournal.com.