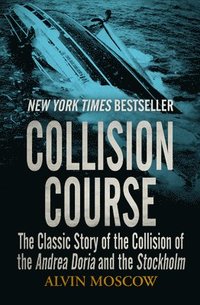 av Alvin Moscow
Häftad Engelska, 2018-01-16
272
Köp
Spara som favorit
Finns även som
Visa alla 1 format & utgåvor
The definitive New York Times-bestselling account: "One of the most intriguing and thought-provoking books about shipwreck since A Night to Remember" (The Detroit News). One of the largest, fastest, and most beautiful ships in the world, the Andrea Doria was on her way to New York from her home port in Genoa. Departing from the United States was the much smaller Stockholm. On the foggy night of July 25, 1956, fifty-three miles southeast of Nantucket in the North Atlantic, the Stockholm sliced through the Doria's steel hull. Within minutes, water was pouring into the Italian liner. Eleven hours later, she capsized and sank into the ocean. In this "electrifying book," Associated Press journalist Alvin Moscow, who covered the court hearings that sought to explain the causes of the tragedy and interviewed all the principals, re-creates with compelling accuracy the actions of the ships' officers and crews, and the terrifying experiences of the Doria's passengers as they struggled to evacuate a craft listing so severely that only half of its lifeboats could be launched (Newsweek). Recounting the heroic, rapid response of other ships-which averted a catastrophe of the same scale as that of the Titanic-and the official inquest, Moscow delivers a fact-filled, fascinating drama of this infamous maritime disaster, and explains how a supposedly unsinkable ship ended up at the bottom of the sea. In the New York Times Book Review, Walter Lord, author of A Night to Remember, said of Collision Course: "More than a magnificent analysis of the accident and sinking; it is a warmly compassionate document, full of understanding for the people on each side."
Visa hela texten

"This brilliantly exciting narrative will go down as one of the great sagas of the sea." -Harper's Magazine "Alvin Moscow's splendid book tells the full story. . . . More than a magnificent analysis of the accident and sinking; it is a warmly compassionate document, full of understanding for the people on each side." -Walter Lord, The New York Times Book Review "One of the most intriguing and thought-provoking books about shipwreck since A Night to Remember." -The Detroit News "An electrifying book." -Newsweek "People who liked Lord's A Night to Remember will want to read this dramatic, hour-by-hour reconstruction of the Andrea Doria disaster." -Booklist "A highly perceptive, immensely readable account of the [Doria-Stockholm] collision." -Chicago Tribune "Dramatically recounts the night of death and horror . . . Moscow gives the best explanation yet of the basic questions involved in the disaster." -Akron Beacon Journal "Thrilling . . . gripping . . . a really stupendous book." -Alexander Crosby Brown, maritime historian, Daily Press (Newport)

Alvin Moscow worked as a journalist for the New York Times and the Associated Press, where he covered the court hearings that sought to determine the cause of the crash of two ocean liners, the Andrea Doria and the Stockholm-the subject of his critically acclaimed New York Times-bestselling book Collision Course. He has written and collaborated on fourteen other books, including The Rockefeller Inheritance, Merchants of Heroin, and autobiographies of Richard M. Nixon, Patricia Hearst, William S. Paley, and Harold Geneen. He currently lives in Nevada.