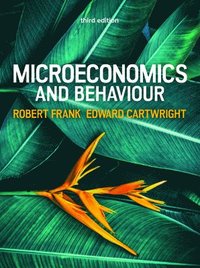 It develops core analytical and technical tools and embeds them in a collection of real-world examples and applications to illuminate
the power and versatility of the economic way of thinking.

With this approach, students develop economic intuition and are stimulated to think more deeply about the technical tools they learn,
and to find more interesting ways to apply them. This enables students to not just understand microeconomics, but to think like
economists themselves, and to develop a lasting interest in the discipline.

Economic Naturalist examples that show how economic principles can be used to explain experiences and observations
of everyday life. New examples include: Why do firms benefit from the gig economy?, Why is self-checkout becoming
the norm in shops?, and Why do online retailers have flagship stores?.

Connect Resources
Available with McGraw-Hill Educations Connect, the well-established online learning platform, which helps faculty and
institutions improve student outcomes and course delivery efficiency. In addition to maths tutorials and SmartBook, the awardwinning
adaptive reading experience, the new Connect features for this edition include:
Economic Application Based Activities that provide students with valuable practice, using problem solving skills to apply
their knowledge to realistic scenarios. Students progress from understanding basic concepts to using their knowledge to
analyse complex scenarios and solve problems.
Economic Naturalist graphing questions which have been newly developed to complement this key pedagogical feature
from the textbook.
Interactive Graphs that help students see the relevance of the subject matter by providing visual displays of real data for
students to manipulate. All graphs are accompanied by assignable assessment questions and feedback for students.
To learn more, visit mheducation.co.uk/connect
Visa hela texten

Robert H. Frank received his M.A. in statistics from the University of California at Berkeley in 1971, and his Ph.D. in economics in 1972, also from U.C. Berkeley. He is the Goldwin Smith Professor of Economics at Cornell University, where he has taught since 1972 and where he currently holds a joint appointment in the department of economics and the Johnson Graduate School of Management. He has published on a variety of subjects, including price and wage discrimination, public utility pricing, the measurement of unemployment spell lengths, and the distributional consequences of direct foreign investment. For the past several years, his research has focused on rivalry and cooperation in economic and social behaviour.

Edward Cartwright is a Senior Lecturer for Economics at University of Kent.