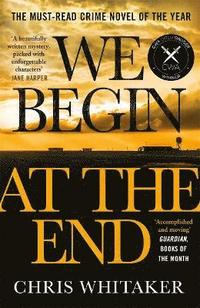 We Begin at the End

av Chris Whitaker
(4 röster)  |  Läs 2 recensioner
Häftad Engelska, 2020-08-06
118
Köp
Spara som favorit
Finns även som
Visa alla 2 format & utgåvor
*THE THEAKSTON'S OLD PECULIER CRIME NOVEL OF THE YEAR 2021* *WINNER OF THE CWA GOLD DAGGER FOR BEST CRIME NOVEL OF THE YEAR* *WINNER OF THE NED KELLY INTERNATIONAL AWARD* A GUARDIAN BEST THRILLER OF THE YEAR An EXPRESS BEST THRILLER OF THE YEAR An i BEST THRILLER OF THE YEAR A MIRROR BEST BOOKS OF THE YEAR A WATERSTONES THRILLER OF THE MONTH READ THE BOOK EVERYONE IS CALLING A MASTERPIECE! 'A beautifully written mystery, packed with unforgettable characters' JANE HARPER 'Contender for thriller of the year' SUNDAY EXPRESS 'An accomplished and moving story of crime, punishment, love and redemption' GUARDIAN For fans of Jane Harper's The Dry comes a powerful novel about the lengths we will go to keep our family safe. This is a story about good and evil and how life is lived somewhere in between. Thirty years ago, Vincent King became a killer. Now, he's been released from prison and is back in his hometown of Cape Haven, California. Not everyone is pleased to see him. Like Star Radley, his ex-girlfriend, and sister of the girl he killed. Duchess Radley, Star's thirteen-year-old daughter, is part-carer, part-protector to her younger brother, Robin - and to her deeply troubled mother. But in trying to protect Star, Duchess inadvertently sets off a chain of events that will have tragic consequences not only for her family, but also the whole town. Murder, revenge, retribution. How far can we run from the past, when the past seems doomed to repeat itself? WHAT PEOPLE ARE SAYING ABOUT WE BEGIN AT THE END: 'Magnificent . . . an instant classic, a West Coast Where the Crawdads Sing . . . a special, vital novel. I'm grateful to have read it' A J FINN 'Surely destined to conquer the world' RUTH JONES 'A magnificent crime novel. It deserves to win a hatful of awards. A BIG hat. Consider me a major fan' MARK BILLINGHAM 'So beautifully written' LYNDA LA PLANTE 'Incredible writing, characters so brilliantly drawn they jump off the page. Outstanding' BA PARIS 'I LOVED this book . . . This is a book to be read and re-read and an author to be celebrated' LOUISE PENNY 'A stunning and heartbreaking book - will keep you gripped until the last moving page' CLAIRE MCGOWAN 'An exceptionally beautiful and accomplished crime novel' ALI LAND 'One of the best books I've ever read' FIONA CUMMINS 'An absolute masterclass in crime writing and story-telling' JO SPAIN 'One of the year's best crime reads' VASEEM KHAN 'One of my favourite books of all time' M. W. CRAVEN, winner of the CWA's Gold Dagger Award 'Breathtakingly beautiful. Another stunning story from the genius of Chris Whitaker' COMPULSIVE READERS 'A spellbinding masterclass in storytelling . . . one of the best books I have ever had the joy to read' ALEX J BOOKS BLOG 'A masterpiece . . . a contender for my top book of 2020' FOR WINTER NIGHTS BLOG 'I was totally seduced by this absolute masterpiece . . . took my breath away' SUIDI'S BOOK REVIEWS 'This book is bound to become a classic . . . Reader, Chris Whitaker's book made me cry . . . such is the power of this writing' LIVE AND DEADLY BLOG 'Utterly brilliant . . . This isn't just crime fiction, this is a masterclass' MELANIE READS BLOG 'A masterpiece of storytelling with clever twists and an ending to knock you sideways' CANDIS MAGAZINE 'This heart-rending story . . . is among the most powerful and moving I have read in years' DAILY MAIL 'Cements Whitaker's status as one of the most talented authors writing today' HEAT MAGAZINE 'Masterly novel' SUNDAY EXPRESS 'A dark yet painfully human tale that is impossible to forget' CRIME MONTHLY 'Beautifully written and deeply moving' SUNDAY TIMES CRIME CLUB 'A gorgeous, crystalline novel' JEANINE CUMMINS, author of AMERICAN DIRT 'Heartbreaking and profound, this is my thriller of the year' MIRROR
Visa hela texten

A beautifully written mystery, packed with unforgettable characters. An intricately woven portrait of small town intrigue where old and new sins collide * Jane Harper * I LOVED it. I mean, jeez, what a story. And so intricately, delicately written, with such care and affection for all the characters. I adored all the relationships and ALL the characters without exception - I mean Duchess!! I could seriously rave about every single character that people the world of this book . . . his descriptions are so vivid, so visual, so beautifully drawn.We Begin at the End is surely destined to conquer the world. This intensely captivating story and its uniquely intriguing characters holds you in its jaws till the very last word. Astonishingly good * Ruth Jones * A magnificent crime novel. It deserves to win a hatful of awards. A BIG hat. Consider me a major fan * Mark Billingham * The character of Duchess Day Radley is so beautifully written, she will remain with you for a long time * Lynda La Plante * I love Duchess Day Radley so much I want to adopt her. She is every thirteen-year-old girl at risk, an outlaw both pure of heart and ill of intent, a fierce and melancholy girl, so memorable she will make camp in your brain and never leave. In We Begin at the End, Chris Whitaker has written a gorgeous, crystalline novel, a cautionary tale about the long shadows cast by our past selves, and one defiant girl with the bravery to hope for something better. I love this beautiful book * Jeanine Cummins, author of American Dirt * An accomplished and moving story of crime, punishment, love and redemption * Guardian, Books of the Month * Chris Whitaker's third novel, We Begin at the End, is the kind of breakout book that publishers dream about. Rich with character and story, conflict and tension, humor, tragedy and raw, unadulterated guts, this one has it all. Throw in the most compelling young protagonist I've read in at least a decade, and you have a deep and meaningful story that is an absolute delight from first page to last. Nicely done, Mr. Whitaker! * John Hart * Let's begin at the end. After you've turned the final page of Chris Whitaker's magnificent new novel, you'll struggle - I struggled, certainly - to describe the experience . . . it's an instant classic, a West Coast Where the Crawdads Sing; its prose shimmers like a mirage; in intensity and lyricism, it recalls the very best of Tana French and Dennis Lehane; for pace and whiplash plot twists, it rivals C. J. Box and Peter May . . . This is a murder mystery, yes, and an extraordinarily gripping one - but like the murder mysteries of Louise Penny, Jane Harper, and Kate Atkinson, it's humanity that most enriches Whitaker's novel (and Whitaker's readers) . . . think of We Begin at the End as a novel at the same time distinctly American and profoundly universal: a book that explores both this particular community, these particular lives, even as it maps emotional territory rarely charted in contemporary fiction. What a special, vital novel. I'm grateful to have read it * A. J. Finn * I LOVED this book. From the riveting plot, to the beautiful writing. But mostly what kept me longing to get back to it each day were the characters, especially young Duchess. Fierce, brave, vulnerable she leaps off the page fully formed. As does Walk. How aptly named. A chief of police on his own inexorable journey. This is a book to be read and re-read and an author to be celebrated * Louise Penny * Beautifully written, We Begin at the End really reminds me of To Kill a Mockingbird. And the spirit of Scout is very much alive in Duchess. A crime novel, or maybe a novel about a crime, and yet so much more * Sarah Pinborough * Stunning, intoxicating, heart-breaking - without a doubt one of my favourite books of the year. A compelling story, beautifully-drawn characters and writing that leaps off the page: We Begin at the Endis in a class of its own * T M Logan * An intense, evocative, and quite brilli

Chris Whitaker is the award-winning author of Tall Oaks and All The Wicked Girls. Both books were published to widespread critical acclaim, with Tall Oaks going on to win the CWA John Creasey New Blood Dagger Award. Chris lives in Hertfordshire with his family. Follow Chris on Twitter @WhittyAuthor