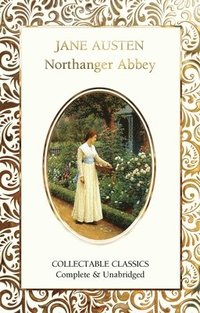 av Jane Austen
Inbunden Engelska, 2019-10-15
101
Köp
Spara som favorit
Finns även som
Visa alla 8 format & utgåvor
Little treasures, the FLAME TREE COLLECTABLE CLASSICS are chosen to create a delightful and timeless home library. Each stunning, gift edition features deluxe cover treatments, ribbon markers, luxury endpapers and gilded edges. The unabridged text is accompanied by a Glossary of Victorian and Literary terms produced for the modern reader. Originally titled Susan, Northanger Abbey was written before any of Jane Austen's other novels, but published after her death in 1817. It is a satire of the gothic novel popular at the time, full of weeping, frustrated romance, dark corridors and deep yearnings. At the core of the book are the mysterious rooms within the Abbey that nobody seems to visit. Could they hold a dark secret? Is there a rotten core at the heart of the house and the family that holds court to all? Catherine is determined to find out more, but is distracted by the machinations of her fellows, the flirtations and engagements of the family and her love for clever, young Henry Tilney.
Visa hela texten

In the history of literature, few female authors have attained the enduring popularity of Jane Austen (1775-1817). Her exquisite, finely tuned novels have captivated readers for two hundred years, and her reputation shows no signs of diminishing, fuelled by high-profile TV and film adaptations of her writing. The substance of her work, and the source of her appeal, is quintessentially English. She takes the reader into the subtle cultural, linguistic and romantic codes of nineteenth-century English society, and in doing so creates some of literature's favourite heroes and heroines. Judith John (Glossary) is a writer and editor specializing in literature and history. She has worked as an editor on major educational projects, including English A: Literature for the Pearson International Baccalaureate series. Judith's major research interests include Romantic and Gothic literature, and Renaissance drama.