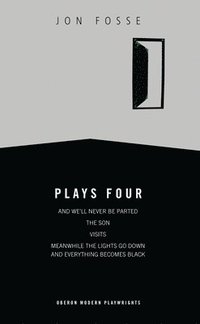 av Jon Fosse
Häftad Engelska, 2005-04-01
289
Köp
Spara som favorit
Kan levereras innan julafton!
"Includes the plays And We'll Never be Parted, The Son, Visits and Meanwhile the lights go down and everything becomes black. In And We'll Never be Parted, Jon Fosse exploits theatre's unique potential for ambiguity: as a woman anxiously waits for her husband, are we watching reality, fantasy, memory, or even a ghost story? The Son concerns an ageing and isolated couple, whose long-absent son has a score to settle with their meddlesome neighbour. In the oblique but psychologically penetrating Visits, a withdrawn teenager, apparently upset by the attentions of her mother's boyfriend, turns to her brother for help. The short play Meanwhile the lights go down and everything becomes black, exploring the dilemmas of an errant husband, his young lover and his family, displays Fosse's characteristic compression of theatrical time and space at its most concentrated."
Visa hela texten

Jon Fosse's work includes novels, poetry, essays and books for children. He is one of the most produced playwrights in Europe and his plays have been translated into more than forty languages. Oberon Books publishes Plays One (Someone Is Going to Come, The Name, The Guitar Man, The Child), Plays Three (Mother and Child, Sleep my Baby Sleep, Afternoon, Beautiful, Death Variations), Plays Four (And We'll Never Be Parted, The Son, Visits, Meanwhile the Lights Go Down and Everything Becomes Black), Plays Five (Suzannah, Living Secretly, The Dead Dogs, A Red Butterfly's Wing, Warm, Telemakos, Sleep), Nightsongs, The Girl on the Sofa and I Am The Wind. Fosse was made a Chevalier of the Ordre national du Merite of France in 2007 and received The International Ibsen Award in 2010. Ann Henning Jocelyn is an author and translator of numerous books and plays. Her English translations of plays by Jon Fosse have won her much acclaim.