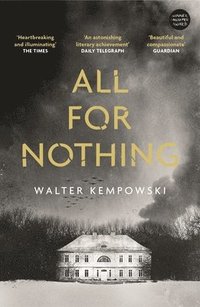 av Walter Kempowski
Häftad Engelska, 2016-07-07
107
Köp
Spara som favorit
Finns även som
Visa alla 2 format & utgåvor
A brilliantly evocative, atmospheric novel about the delusion and indecision of a wealthy family in the last days of the Third Reich as the Russians advance from the east In January 1945, the German army is retreating from the Russian advance. Germans are fleeing the occupied territories in their thousands, in cars and carts and on foot. But in a rural East Prussian manor house, the wealthy von Globig family seals itself off from the world. Protected from the deprivation and chaos around them, they make no preparations to leave until a decision to harbour a stranger for the night begins their undoing. Finally joining the great trek west, the remaining members of the family face at last the catastrophic consequences of the war. Profoundly evocative of the period, sympathetic yet painfully honest about the motivations of its characters, All for Nothing is a devastating portrait of the complicities and denials of the German people as the Third Reich comes to an end.
Visa hela texten

It is brilliant, vivid, unsentimental, fast moving, cinematic and, for all its apparent ease of telling, scrupulously well-structured. The distinguished translator Anthea Bell has conveyed Kempowski's wry tone... Kempowski's late masterwork is a universal tract which suggests that history can only present the facts; it is crafted stories such as this which enable us to grasp a sense of the vicious reality of war -- Eileen Battersby * Irish Times * A beautiful, forgiving and compassionate book... It reaches its last devastating line with poetic sensibility and the grace of a classical tragedy, confirming Kempowski as a truly great writer... Completely gripping * Guardian * Seethes with human drama, contradiction and complexity... An astonishing literary achievement * Daily Telegraph * With restraint and subtlety, Kempowski explores the ordinariness of complicity with evil... heartbreaking and illuminating -- Antonia Senior * The Times * One of the best books I've ever read -- Jenny Erpenbeck, author * The End of Days * I love this book. It is Kempowski's crowning achievement: his last, and lasting work of fiction -- Rachel Seiffert A novel of profound depth and originality * Sunday Times * Turns a clear-eyed, compassionate gaze on an aristocratic family in East Prussia * Sunday Times * This is a brilliant, deceptively simple exploration of everyday complicity with evil * The Times * An epic of exodus, timely for our days * Jewish Chronicle * [A] stunning final novel by German author Walter Kempowski... Beneath its apparently serene facade, the book seethes with human drama and complexity. The tone is wryly reductive; a fable that becomes a nightmare. * Sunday Telegraph * [A] narrative of profound depth and originality... Kempowski tells his story of individuals caught up in history's sweep with a dispassionate simplicity that adds to its power. -- Nick Rennison * Sunday Times * Gripping and dark... I read [it] with huge admiration and yes, a bit of envy for the author's skill, imagination and daring -- Margaret McMillan, Best Books of 2016 * New Statesman * Kempowski tells his story of individuals caught up in history's wider sweep with a dispassionate simplicity -- 100 Modern Novels to Love * Sunday Times *

WALTER KEMPOWSKI (1929 - 2007) was one of Germany's most important post-war writers. He is known for his acclaimed series of novels German Chronicles (Deutsche Chronik) and his immense, eight-volume collection of first-hand accounts of World War II, Echo Soundings (Das Echolot), the final volume of which, Swansong 1945, was published by Granta in English in 2014. His last novel All for Nothing (Alles Umsonst), a bestseller in Germany in 2006 and critically applauded, sealed his reputation. It is available here in translation for the first time.