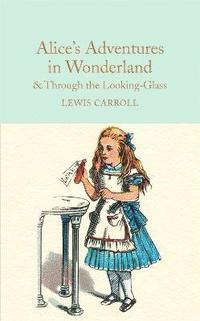 Alice's Adventures in Wonderland &; Through the Looking-Glass

And What Alice Found There

av Lewis Carroll
(1 röst)
Inbunden Engelska, 2016-07-14
89
Köp
Spara som favorit
Finns även som
Visa alla 2 format & utgåvor
It's a warm summer's afternoon when young Alice first tumbles down the rabbit hole and into the adventures in Wonderland that have kept readers spellbound for more than 150 years. Part of the Macmillan Collector's Library; a series of stunning, clothbound, pocket sized classics with gold foiled edges and ribbon markers. These beautiful books make perfect gifts or a treat for any book lover. This edition is brought to life by Sir John Tenniel's legendary illustrations in black and white, and with an afterword by Anna South. Collected here are Lewis Carroll's two classics - Alice's Adventures in Wonderland and Through the Looking-Glass - in which Alice encounters the laconic Cheshire Cat, the anxious White Rabbit and the terrifying Red Queen, as well as a host of other outlandish and charming characters.
Visa hela texten

I revelled in all the logical games, and the wordplay. It made me laugh till my sides hurt -- Richard Cohen * Independent * 'Alice' makes the logic of the everyday world appear nonsensical and the absurd make glorious sense -- Mark Hudson * The Telegraph *

Charles Lutwidge Dodgson, celebrated under his pseudonym Lewis Carroll, was born in 1832. His fascination with word games, puzzles and writing was evident from an early age. He was educated at Rugby School and then Christ Church, Oxford, where he was later appointed lecturer in mathematics and subsequently spent the rest of his life there. His most famous works are Alice's Adventures in Wonderland (1865), its sequel Through the Looking-Glass, and What Alice Found There (1871) and The Hunting of the Snark (1876). He died, unmarried, in 1898.