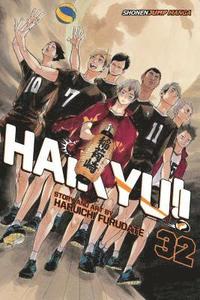 av Haruichi Furudate
Häftad Engelska, 2019-05-16
112
Bevaka
Spara som favorit
Tillfälligt slut – klicka "Bevaka" för att få ett mejl så fort boken går att köpa igen.
Shoyo Hinata is out to prove that in volleyball you don't need to be tall to fly! Ever since he saw the legendary player known as "the Little Giant" compete at the national volleyball finals, Shoyo Hinata has been aiming to be the best volleyball player ever! Who says you need to be tall to play volleyball when you can jump higher than anyone else? Galvanized by Atsumu Miya's selfless setting, Inarizaki gets back into a groove! It's the back half of the last set, and Inarizaki is in the lead. But right when the Miya Twins think they've got Karasuno dead to rights, their attack is stopped by the last person anyone expected!
Visa hela texten

Haruichi Furudate began his manga career when he was 25 years old with the one-shot Ousama Kid (King Kid), which won an honorable mention for the 14th Jump Treasure Newcomer Manga Prize. His first series, Kiben Gakuha, Yotsuya Sensei no Kaidan (Philosophy School, Yotsuya Sensei's Ghost Stories), was serialized in Weekly Shonen Jump in 2010. In 2012, he began serializing Haikyu!! in Weekly Shonen Jump, where it became his most popular work to date.