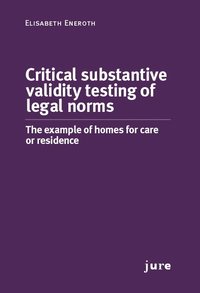 av Elisabeth Eneroth
Häftad Engelska, 2016-05-09
279
Köp
Spara som favorit
Skickas inom 2-5 vardagar.
Fri frakt inom Sverige för privatpersoner.
This book deals with the explorative elaboration of a legal analytical tool for critical substantive validity testing of legal norms within a certain legal order. It is applied to the example of homes for care or residence. The tool consists of five steps with operations and working operations. The first step is the choice of a legal norm. The second step is the analysis of the structure of the argument. The third step is the validity indicator. The fourth step is linguistic rationality. The fifth step is the prospect of factual acceptance. Focus is on the interaction between the law as a legal order and as legal practices for performance of critical substantive validity testing of a legal norm within a certain legal order.

The legal analytical tool provides a procedure for performing an internal criticism of the law within legal science. It is a conversion of Kaarlo Tuori"s critical legal positivism and his conception of legal validity (Critical Legal Positivism, 2002) into practical use in legal phi-losophy. It is also a conversion of Jürgen Habermas" method rational reconstruction ("What is Universal Pragmatics?" in Communication and the Evolution of Society, 1979) into practical use in legal philosophy. This is, in turn, done through elaboration of method tools: analysis of the structure of an argument, reconstruction and linguistic sub(competence). Focus is on the unification of theory and method for performance of critical substantive validity testing of a legal norm within a certain legal order.

This book is arranged as a description of the performance of an explorative research process in legal science from start to finish.