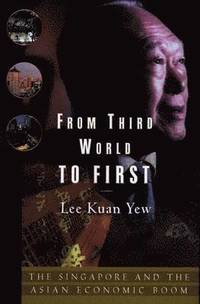 From Third World to First

Singapore and the Asian Economic Boom

av Lee Kuan Yew
(4 röster)
Häftad Engelska, 2011-02-20
205
Köp
Spara som favorit
Few gave tiny Singapore much chance of survival when it was granted independence in 1965. How is it, then, that today the former British colonial trading post is a thriving Asian metropolis with not only the world's number one airline, best airport, and busiest port of trade, but also the world's fourth-highest per capita real income? The story of that transformation is told here by Singapore's charismatic, controversial founding father, Lee Kuan Yew. Rising from a legacy of divisive colonialism, the devastation of the Second World War, and general poverty and disorder following the withdrawal of foreign forces, Singapore now is hailed as a city of the future. This miraculous history is dramatically recounted by the man who not only lived through it all but who fearlessly forged ahead and brought about most of these changes. Mr. Lee is one of the most respected political figures in the world today ("Time" and "Newsweek" regularly profile his socio-economic strategies and his regime), and recognition of his name among academic, political, historical and sociological circles is guaranteed. This volume also features a foreword from Dr. Henry Kissinger.
Visa hela texten

Lee Kuan Yew was born in Singapore on September 16, 1923, a third-generation descendant of immigrants from China's Guangdong Province. He read law at Cambridge University, England. In 1954 he formed the People's Action Party, which won the first Singapore general election five years later. Lee became the country's first prime minister in 1959, at the age of thirty-five. In November 1990 he resigned the office to assume the post of senior minister in the Singapore cabinet.