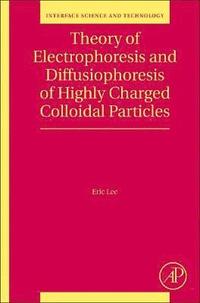 Theory of Electrophoresis and Diffusiophoresis of Highly Charged Colloidal Particles

The contents are suitable for researchers, graduate students, or senior college students with some basic background of colloid science and transport phenomena. As there is no closed-form analytical formula in general for the situation of highly charged particles, the results are presented with extensive figures and plots as well as tables under various electrokinetic situations of interest to facilitate the possible use of interested readers.

Eric Lee is a Professor in the Department of Chemical Engineering, National Taiwan University, Taipei, Taiwan. He obtained a PhD in Chemical Engineering in 1986 from the University of Washington, USA. His research areas include polymeric fluid mechanics and electrokinetic motions of colloidal particles. He investigates the fluid motion of liquid phase systems containing polymers, such as polymer solutions, polymer melts, and other non-Newtonian fluids. Further he investigates the general electrokinetic behavior of colloidal particles of sub-micron or nano-scale dimensions in either dilute or concentrated suspensions, focusing on the electrophoretic motion above all. The impact of air-water interface as well as particle migrations in gel or porous media has been of particular interest in recent years. In 2005 he received the National Taiwan University Fu Sinian Award. Eric Lee has published more than 70 articles in international scientific journals.