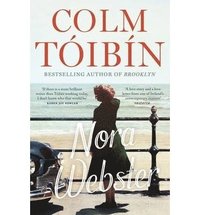 av Colm Toibin
(4 röster)  |  Läs 1 recension
Häftad Engelska, 2015-01-29
114
Köp
Spara som favorit
Kan tyvärr inte levereras innan julafton.
Finns även som
Visa alla 1 format & utgåvor
* * * Shortlisted for the 2014 Costa Novel Awards and the 2015 Folio Prize * * * Nora Webster is the heartbreaking new novel from one of the greatest novelists writing today. It is the late 1960s in Ireland. Nora Webster is living in a small town, looking after her four children, trying to rebuild her life after the death of her husband. She is fiercely intelligent, at times difficult and impatient, at times kind, but she is trapped by her circumstances, and waiting for any chance which will lift her beyond them. Slowly, through the gift of music and the power of friendship, she finds a glimmer of hope and a way of starting again. As the dynamic of the family changes, she seems both fiercely self-possessed but also a figure of great moral ambiguity, making her one of the most memorable heroines in contemporary fiction. The portrait that is painted in the years that follow is harrowing, piercingly insightful, always tender and deeply true. Colm Toibin's Nora is a character as resonant as Anna Karenina or Madame Bovary and Nora Webster is a novel that illuminates our own lives in a way that is rare in literature. Its humanity and compassion forge an unforgettable reading experience. 'A profoundly gifted world writer' Sebastian Barry
Visa hela texten

A fine companion piece to his acclaimed novel, Brooklyn . . . Mixing irony and nostalgia in its portrayal of a provincial Irish town. Subtle and enthralling * Sunday Times, Books of the Year * Toibin's measured prose and close attention to emotional nuance is shown at its best here * Daily Telegraph, Books of the Year * This is his best yet. The ache of a widow's grief is rendered with such an unadorned intensity that you might not think the book could be entertaining too, but it is * Spectator, Books of the Year * A clear-sighted yet sympathetic portrait of a woman destabilised by grief * Financial Times, Books of the Year * So rich, so observant, so moving * Observer, Books of the Year * Tender, delicately oblique in its narration, and exquisitely well-written * The Times * A luminous, elliptical novel in which everyday life manages, in moments, to approach the mystical . . . There is much about Nora Webster that we never know. And her very mystery is what makes her regeneration, when it comes, feel universal -- Jennifer Egan * New York Times * Beautiful and heartbreaking. It's so richly detailed and laced with such dialogue that you feel like you are living in Nora's world * Independent * Arresting. As this novel movingly proposes, there are no ordinary women and no ordinary lives * Irish Indendent * The story is so expertly crafted that it achieves a luminous intensity, which lingers long in the memory * Mail on Sunday * This novel deserves to be read as closely as Nora listens to Beethoven. It leaves you with much to ponder . . . Our bond with the Websters makes us imagine they're out there, living and longing, with fire crackling in their hearth * Guardian * [A] love story and a love letter . . . from one of Ireland's contemporary masters * Observer * This very readable novel undercuts the cliches of misery fiction . . . Toibin's great weapon in this regard is Nora's genuine agency as a character. Both she and the novel which bears her name are defined by what has come before, this is true, both both are more interested in moving forward than being caught in the past * Irish Examiner * This novel is the real thing, rare and tremendous . . . It does everything we ought to ask of a great novel: that it respond to the fullness of our lives, be as large as life itself -- Tessa Hadley * Guardian 'Book of the Week' * A work of extraordinary achievement. In Nora Webster the slow build-up of pressure, the sense of pain experienced and barely withstood, is cumulatively almost unbearable, and the climax provides a catharsis that raises the hairs on the back of your head. The novel at once takes it place with the very best of Toibin's fiction -- Roy Foster * Irish Times * In plain and unsentimental prose, Colm Toibin has created a character who, in her recently widowed state, must find her way through life for herself and her children. Deftly depicting the self-confined world of Nora and her boys, Toibin provokes sympathy from the reader, but also unexpected feelings of frustation as Nora dwells on the death of a husband who cushioned her against the realities of life. As haunting as Hedda Gabler, Toibin's latest offering a triumphant addition to his canon. The relatable voice of Nora Webster will remain with the reader long after the story has ended * The Lady * Nora Webster is a beautiful and heartbreaking portrayal of one woman's experience of depression and loneliness. But it also evokes the protagonist's struggle to find - and express - her own voice and identity. Quietly perceptive and [a] wonderfully modulated portrayal . . . It's so richly detailed and laced with such dialogue that you feel like you are living in Nora's world. Very moving * Radar * Moving, honest and truthful, this is a masterful depiction of the grief process * Psychologies * Beautifully told * Good Housekeeping * Toibin is a master at evoking emotions with particular sensitivity . . . This is a beguiling story that envelops readers like Irish mist. The s