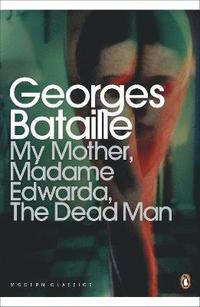 av Georges Bataille
Häftad Engelska, 2012-06-07
129
Köp
Spara som favorit
Finns även som
Visa alla 1 format & utgåvor
In these three works of erotic prose Georges Bataille fuses sex and spirituality in a highly personal and philosophical vision of the self. My Mother is a frank and intense depiction of a young man's sexual initiation and corruption by his mother, where the profane becomes sacred, and intense experience is shown as the only way to transcend the boundaries of society and morality. Madame Edwarda is the story of a prostitute who calls herself God, and The Dead Man, published in 1964 after Bataille's death, is a startling short tale of cruelty and desire. This volume also contains Bataille's own introductions to his texts as well as essays by Yukio Mishima and Ken Hollings.
Visa hela texten

The power of Bataille's prose is still impressive, his capacity to shock still compelling * Literary Review *

Georges Bataille, French essayist and novelist, was born in 1897. He converted to Catholicism, then to Marxism, and was interested in psychoanalysis and mysticism. As curator of the municipal library in Orleans, he led a relatively simple life, although he became involved, usually on the fringes, with the surrealist movement. He founded the literary review Critique in 1946, which he edited until his death in 1962, and was also a founder of the review Documents, which published many of the leading surrealist writers. His writing is a mixture of poetry and philosophy, fantasy and history, and his first novel, Story of the Eye, was written under the pseudonym of Lord Auch. Bataille's other works include the novels Blue of Noon and L'Abbe C, and the volumes of essays Eroticism and Literature and Evil.