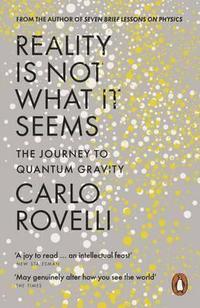 Reality Is Not What It Seems

The Journey to Quantum Gravity

av Carlo Rovelli
(2 röster)
Häftad Engelska, 2017-06-01
129
Köp
Spara som favorit
Skickas inom 7-10 vardagar.
Fri frakt inom Sverige över 159 kr för privatpersoner.
Finns även som
Visa alla 2 format & utgåvor
'The physicist transforming how we see the universe' (Financial Times) 'An utter joy' (Adam Rutherford) 'A hugely engaging book... Rovelli is a charming, thought-provoking tour guide' (Manjit Kumar Prospect) Do space and time truly exist? What is reality made of? Can we understand its deep texture? Scientist Carlo Rovelli has spent his whole life exploring these questions and pushing the boundaries of what we know. In this mind-expanding book, he shows how our understanding of reality has changed throughout centuries, from Democritus to loop quantum gravity. Taking us on a wondrous journey, he invites us to imagine a whole new world where black holes are waiting to explode, spacetime is made up of grains, and infinity does not exist -- a vast universe still largely undiscovered. Translated by Simon Carnell and Erica Segre
Visa hela texten

If your desire to be awestruck by the universe we inhabit needs refreshing, theoretical physicist Carlo Rovelli is up to the task * Elle * May genuinely alter how you see the world -- Tom Whipple * The Times * A marvel... In exquisitely written pages Rovelli seeks to bridge the divide between what CP Snow called the "Two Cultures" of science and the arts -- Ian Thomson * Guardian * Like all great thinkers, Rovelli has a talent for simplicity. His prose is lucid and poetic... It's not a scientific treatise. It's a paean to the wonder of the natural world... I scraped a C in my Physics O-level and haven't been near a physics textbook since. If I can understand - and even enjoy - Rovelli's book, then anyone can -- William Cook * Spectator * Be prepared for your intellectual foundations to be vaporised... Carlo Rovelli will melt your synapses with this exploration of physical reality and what the universe is formed of at the very deepest level... Quantum gravity is so new that there aren't many popular books about it. You couldn't be in better hands than Rovelli, a world expert -- Tara Shears * The Times Higher Education * Rovelli writes with elegance, clarity and charm... A joy to read, as well as being an intellectual feast -- Michael Brooks * New Statesman * A comprehensive guide to the bewitching adventure of physics * Daily Telegraph * The latest thinking in physics is distilled in this primer... Why do you need yet another popularisation of theoretical physics? Because Rovelli writes with crystalline simplicity. And because he turns quantum physics into a coherent story, shaping it as a quest for a single, underlying "substratum" of reality - from Democritus's finite, indivisible atoms to Einstein -- James McConnachie * Sunday Times * Rather brilliant... for fans of cutting-edge physics made accessible -- Mark Haddon This is a really, really good book about science. It's like a tonic for the mind. Carlo Rovelli is a physicist so of course this book is about physics. But it's much more than that. It's about thinking clearly... He gives beautifully clear explanations of the ideas of the cleverest people in history, from Democritus, via Newton, to Einstein and beyond. * Evening Standard * The new Hawking... His writing is luminous. By the time I had finished reading I was in serious awe of the author -- David Aaronovitch * The Times * The physicist transforming how we see the universe * Financial Times * Surely Rovelli deserves the title 'world's most inspiring physics teacher' * Daily Telegraph * The most fun physicist to be with -- as well as the greatest explainer of physics -- Bryan Appleyard * Sunday Times * A global superstar... Professor Rovelli is making the grammar of the universe accessible to a new generation * Channel 4 News *

Bloggat om Reality Is Not What It Seems

Carlo Rovelli is a theoretical physicist who has made significant contributions to the physics of space and time. He has worked in Italy and the US, and is currently directing the quantum gravity research group of the Centre de physique theorique in Marseille, France. His Seven Brief Lessons on Physics is an international bestseller translated into forty-one languages.