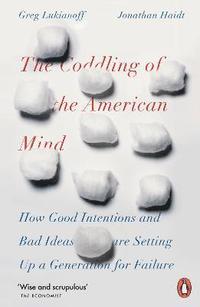 The Coddling of the American Mind

We can talk ourselves into believing that some kinds of speech will shatter us, or we can talk ourselves out of that belief. The authors know the science. We are not as fragile as our self-appointed protectors suppose. Read this deeply informed book to become a more resilient soul in a more resilient democracy. -- Philip E. Tetlock Our behavior in society is not immune to the power of rational scientific analysis. Through that lens, prepare yourself for a candid look at the softening of America, and what we can do about it. -- Neil deGrasse Tyson No one is omniscient or infallible, so a willingness to evaluate new ideas is vital to understanding our world. Yet universities, which ought to be forums for open debate, are developing a reputation for dogmatism and intolerance. Haidt and Lukianoff, distinguished advocates of freedom of expression, offer a deep analysis of what's going wrong on campus, and how we can hold universities to their highest ideals. -- Steven Pinker A compelling and timely argument against attitudes and practises that, however well-intended, are damaging our universities, harming our children and leaving an entire generation intellectually and emotionally ill-prepared for an ever-more fraught and complex world. A brave and necessary work. -- Rabbi Lord Jonathan Sacks An important if disturbing book . . . Lukianoff and Haidt tell a plausible story -- Niall Ferguson * The Times * Excellent . . . their advice is sound . . . liberal parents, in particular, should read it -- Edward Luce * Financial Times *

Bloggat om The Coddling of the American Mind

Jonathan Haidt (Author) Jonathan Haidt is a social and cultural psychologist and the Thomas Cooley Professor of Ethical Leadership at New York University's Stern School of Business. He is the author of The Righteous Mind and The Happiness Hypothesis. Greg Lukianoff (Author) Greg Lukianoff is a lawyer, First Amendment expert and president of the Foundation for Individual Rights in Education. He is the author of Unlearning Liberty: Campus Censorship and the End of American Debate and Freedom From Speech.