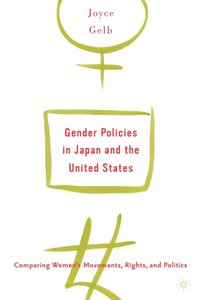 av Joyce Gelb
Häftad Engelska, 2004-01-01
459
Köp
Spara som favorit
Skickas inom 10-15 vardagar.
Fri frakt inom Sverige för privatpersoner.
This book is the first to explore the similarities and differences in gender related policy making and outcomes in Japan and the United States. It focuses on the role of women's movements and other factors in determining policy. Three policies are examined: Equal employment, domestic violence and reproductive rights, with additional attention to gender equality policy in Japan and 'family friendly policy' in both nations. The analysis examines the significance of international feminism and new standards of gender equity - kansetsu gaiatsu - as a resource for Japanese feminists seeking policy reform, as well as new trends toward policy cooperation. The future role of the United States, long a leader in policy development for women, is critically analyzed, and Gelb suggests that American feminists and policymakers can learn important lessons from the experience of Japanese women's movements and efforts at influencing public policy.
Visa hela texten

'With graceful prose and an insightful analytic lens, Joyce Gelb probes three crucial dimensions of women and public policy in Japan and the United States. Scholars and citizens alike can learn a great deal from this study. Gelb's sustained focus on the role of international treaties in advancing women's rights holds provocative - and very troubling - implications for Americans who care about gender equality.' - Sylvia Bashevkin, Professor, University of Toronto 'Joyce Gelb has written an indispensable book for anyone interested in the politics of gender. Her countries of comparison, the U.S. and Japan, provide a richly detailed counterpoint to the usual Anglo/European focus of this topic. And despite the depressing statistics that tell us how far women are from achieving complete equality, Gelb tells an essentially optimistic story about how women activists in these very different countries have made and are making a difference.' - Frances McCall Rosenbluth, Professor of Political Science, Yale University 'Joyce Gelb does a masterful job of describing and comparing women's movements, equal opportunity employment policies, domestic violence policies, reproductive rights policies, and policies meant to harmonize work and family life in Japan and the United States. The book offers students and scholars a complex and sophisticated picture of public policies towards women in both countries. Gelb's study is a major contribution to the field of comparative public policy studies.' - Jane Bayes, Professor of Political Science, California State University

Bloggat om Gender Policies in Japan and the United S...

JOYCE GELB is Professor of political science at City University of New York and a visiting professor at Doshisha University and Tokyo University in Japan. She has received grants from the National Science Foundation, the Japan Society for the Promotion of Science, and the Social Science Research Foundation. Professor Gelb is the author of Feminism and Politics and co-author of Women and Public Policies. She has written articles on women in comparative perspectives on the United States, Japan, and Britain, as well as articles about reproductive rights and equal employment in Japan.