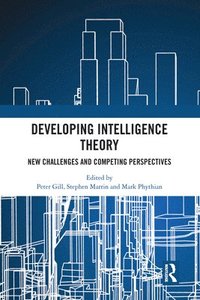 av Peter Gill, Stephen Marrin, Mark Phythian
Häftad Engelska, 2020-06-30
542
Köp
Spara som favorit
Finns även som
Visa alla 3 format & utgåvor
Developing Intelligence Theory analyses the current state of intelligence theorisation, provides a guide to a range of approaches and perspectives, and points towards future research agendas in this field. Key questions discussed include the role of intelligence theory in organising the study of intelligence, how (and how far) explanations of intelligence have progressed in the last decade, and how intelligence theory should develop from here. Significant changes have occurred in the security intelligence environment in recent years-including transformative information technologies, the advent of 'new' terrorism, and the emergence of hybrid warfare-making this an opportune moment to take stock and consider how we explain what intelligence does and how. The material made available via the 2013 Edward Snowden leaks and subsequent national debates has contributed much to our understanding of contemporary intelligence processes and has significant implications for future theorisation, for example, in relation to the concept of 'surveillance'. The contributors are leading figures in Intelligence Studies who represent a range of different approaches to conceptual thinking about intelligence. As such, their contributions provide a clear statement of the current parameters of debates in intelligence theory, while also pointing to ways in which the study of intelligence continues to develop. This book was originally published as a special issue of Intelligence and National Security.
Visa hela texten

Peter Gill is Honorary Visiting Research Fellow at the University of Leicester, UK. He has written Policing Politics: Security Intelligence and the Liberal Democratic State (1994), Rounding Up the Usual Suspects?: Developments in Contemporary Law Enforcement Intelligence (2000), and Intelligence Governance and Democratisation: A comparative analysis of the limits of reform (2016). He has also co-authored Intelligence in an Insecure World (with Mark Phythian, 3rd ed. 2018) and Democratization of Intelligence (with Michael M. Andregg, 2015). Stephen Marrin is an Associate Professor at James Madison University, UK, and previously worked as an analyst with the CIA and the Government Accountability Office (USA). He is a prolific author on aspects of intelligence analysis, and a former Chair of the Intelligence Studies Section of the International Studies Association. In 2004 the National Journal profiled him as one of the ten leading experts on the subject of intelligence reform. Mark Phythian is Professor of Politics in the School of History, Politics & International Relations at the University of Leicester, UK. He has both authored and edited several books on aspects of intelligence, including co-authoring Intelligence in an Insecure World (with Peter Gill, 3rd ed. 2018). He is co-editor of the journal Intelligence and National Security, and a Fellow of the Academy of Social Sciences.