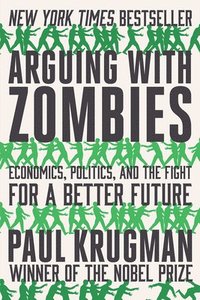 Economics, Politics, and the Fight for a Better Future

av Paul Krugman
Häftad Engelska, 2021-02-16
174
Köp
Spara som favorit
Kan tyvärr inte längre levereras innan julafton.
Finns även som
Visa alla 1 format & utgåvor
There is no better guide than Paul Krugman to basic economics, the ideas that animate much of our public policy. Likewise, there is no better foe of zombie economics, the misunderstandings that just won't die. Arguing with Zombies is Krugman "the most hated and most admired columnist in the US" (Martin Wolf, Financial Times) at his best, turning readers into intelligent consumers of the daily news with quick, vivid sketches of the key concepts behind taxes, health care, international trade and more. In this new book, in which he builds on and expands his The New York Times columns and other writings, "the most celebrated economist of his generation" (The Economist), offers short, accessible chapters on topics including the European Union and Brexit, the fight for national health care in the United States, the financial meltdown of 2007-2008, the attack on Social Security and the fraudulent argument-the ultimate zombie-that tax cuts for the rich will benefit all.
Visa hela texten

"[Arguing with Zombies] is a timely reminder that actual knowledge and ordinary common sense are two of the rarest qualities in mainstream journalism today." -- The Business Telegraph "...Krugman's book proves that he, a Nobel-prize winning economist, shares two rare qualities with George Orwell, the novelist who also wrote much of the best journalism of the 20th century: deep intelligence and genuine prescience." -- Charles Kaiser - The Guardian "... thoughtful, timely book..." -- Nature "... in terms of easy-to-read economic summaries of some of the biggest issues facing Western (particularly American) financial policy making, this book is a treasure-trove." -- FT Advisor "The gigantic scale of the $1.9 trillion Biden rescue plan, and now the proposed $2 trillion infrastructure investment programme, are testament to a rearrangement of the relationship between economic expertise and politics in the Democratic Party, a rearrangement which Krugman anticipated and for which Arguing with Zombies makes a powerful case." -- Adam Tooze - London Review of Books

Paul Krugman, recipient of the 2008 Nobel Prize in Economics and best-selling author, has been a columnist at The New York Times for twenty years. A Distinguished Professor at City University of New York, he lives in New York City.