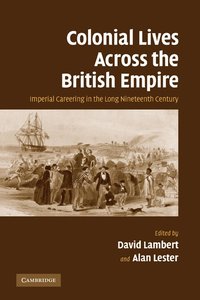 Colonial Lives Across the British Empire

av David Lambert
Häftad Engelska, 2010-06-10
485
Köp
Spara som favorit
Skickas inom 10-15 vardagar.
Fri frakt inom Sverige för privatpersoner.
Finns även som
Visa alla 1 format & utgåvor
This volume uses a series of portraits of 'imperial lives' in order to rethink the history of the British Empire in the nineteenth and early twentieth centuries. It tells the stories of men and women who dwelt for extended periods in one colonial space before moving on to dwell in others, developing 'imperial careers'. These men and women consist of four colonial governors, two governors' wives, two missionaries, a nurse/entrepreneur, a poet/civil servant and a mercenary. Leading scholars of colonialism guide the reader through the ways that these individuals made the British Empire, and the ways that the empire made them. Their life histories constituted meaningful connections across the empire that facilitated the continual reformulation of imperial discourses, practices and cultures. Together, their stories help us to re-imagine the geographies of the British Empire and to destabilize the categories of metropole and colony.
Visa hela texten

Review of the hardback: '[Colonial Lives] brings together recent work on biography and subjectivity on the one hand and the literature on space and place that has done much to shape contemporary apprehensions of empire, and it does so with fresh insight and a lot of intellectual energy as well.' Journal of Colonialism and Colonial History

Review of the hardback: '... this is a fine collection of scholarly essays that shed important light on the complex spatialities of the British Empire. As such it deserves a wide readership. One hopes it will inspire further scholarship to elucidate those new networks that were forged by colonised subjects and that similarly spanned imperial space and shaped subjectivities.' Journal of Historical Geography

Review of the hardback: 'Colonial Lives amply demonstrates what biography at its best can do: provide a window into larger subjects and themes, readable and compelling human sized history.' Journal of Historical Biography

Review of the hardback: 'This book offers more than simply a new spatial framework for understanding empire; it is a series of biographical sketches of life histories that explore the complexity and ambiguity of trans imperial identity through the tracing and mapping of careers across multiple sites of empire.' Journal of Southern African Studies

Review of the hardback: 'Colonial Lives across the British Empire: Imperial Careering in the Long Nineteenth Century, gives readers a solid and more complex sense of the individuals, many of them not well known, who travelled to or worked in the remoter parts of the British empire. Through these individual lives, and as a result of the editors' fine introduction, the reader better understands the idiosyncratic, varied, and complicated nature of being a colonial during that period.' Studies in English Literature 1500-1900

'The volume as a whole works very well as a way of questioning the conventions of writing about the imperial past ... Taken as a whole the collection offers a series of intriguing paths that begin to trace out what mightbe a new historical geography of the circuits of empire.' Cultural Geographies

David Lambert is Lecturer in Human Geography at Royal Holloway, University of London. He is the author of White Creole Culture, Politics and Identity during the Age of Abolition (2005). Alan Lester is Professor of Historical Geography at the University of Sussex. His previous books include South Africa Past, Present and Future (2000) and Imperial Networks: Creating Identities in Nineteenth Century South Africa and Britain (2001).