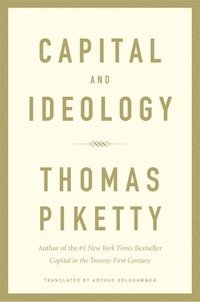 av Thomas Piketty
Inbunden Engelska, 2020-03-10
369
Köp
Spara som favorit
Finns även som
Visa alla 1 format & utgåvor
A New York Times Bestseller An NPR Best Book of the Year The epic successor to one of the most important books of the century: at once a retelling of global history, a scathing critique of contemporary politics, and a bold proposal for a new and fairer economic system. Thomas Piketty's bestselling Capital in the Twenty-First Century galvanized global debate about inequality. In this audacious follow-up, Piketty challenges us to revolutionize how we think about politics, ideology, and history. He exposes the ideas that have sustained inequality for the past millennium, reveals why the shallow politics of right and left are failing us today, and outlines the structure of a fairer economic system. Our economy, Piketty observes, is not a natural fact. Markets, profits, and capital are all historical constructs that depend on choices. Piketty explores the material and ideological interactions of conflicting social groups that have given us slavery, serfdom, colonialism, communism, and hypercapitalism, shaping the lives of billions. He concludes that the great driver of human progress over the centuries has been the struggle for equality and education and not, as often argued, the assertion of property rights or the pursuit of stability. The new era of extreme inequality that has derailed that progress since the 1980s, he shows, is partly a reaction against communism, but it is also the fruit of ignorance, intellectual specialization, and our drift toward the dead-end politics of identity. Once we understand this, we can begin to envision a more balanced approach to economics and politics. Piketty argues for a new "participatory" socialism, a system founded on an ideology of equality, social property, education, and the sharing of knowledge and power. Capital and Ideology is destined to be one of the indispensable books of our time, a work that will not only help us understand the world, but that will change it.
Visa hela texten

In an election cycle where the political discourse has been thoroughly shaped by Piketty's work, his new book feels especially urgent. * GQ * Ventures to trace the origin of inequalities and propose methods of eradication...Lands on the world's doorstep in the midst of an unfolding economic crisis, when the shutdown required to prevent the spread of the coronavirus is sending the world into a spiraling recession...Piketty has put forward proposals for long-term, permanent change, but impressively, they would also be immediately useful in speeding along the recovery. * New Republic * Nothing less than a global history of inequality and the stories that societies tell to justify it, from pre-modern India to Donald Trump's U.S. * Wired * Might become even more politically influential than the French economist's 2013 overview of inequality, Capital in the Twenty-First Century...Piketty explains why this could be the moment for a turn to equality, and which policies could make that happen. -- Simon Kuper * Financial Times * Thomas Piketty's books are always monumental...In the same way that Capital in the Twenty-First Century has transformed how economists look at inequality, Capital and Ideology will transform the way political scientists look at their own field. -- Branko Milanovic * ProMarket * An astonishing experiment in social science, one that defies easy comparison. In its ambition, obsessive testimony and sheer oddness, it is closer to the spirit of Karl Ove Knausgard than of Karl Marx...Will be impossible to ignore. -- William Davies * The Guardian * A book of remarkable clarity and dynamism. Drawing lessons from a breathtaking survey of different historical experiences, it teaches us that nothing is inevitable, that there exist a whole range of possibilities between hypercapitalism and the disasters of the communist experience. It's up to us to make our future. Let's roll up our sleeves. -- Esther Duflo, Nobel Laureate in Economic Sciences A believer in how capitalism can be used to eradicate inequality, Piketty argues for new taxation systems that might minimize the gap between the one percent and the underserved. Whether he's right or wrong, his dazzling intellect makes for thought-provoking reading. * Washington Post * Boldly proclaims that inequality is ultimately rooted in ideology...Offer[s] a global history of how different political systems have justified inequality, and how these systems have been transformed over time. * The Nation * A magisterial history of economic development as seen through the prism of inequality. It is breathtaking in its scholarship and sweep (almost no corner of the globe is left unvisited) and incandescent in its insights...[Piketty] casts his discerning gaze on history's sweep, not just to understand the world but also to transform it. -- Arvind Subramanian * Foreign Affairs * Spenglerian in scope, Piketty's critique reaches far back in history and across the globe...It's an admirable corrective to the usual Eurocentrism of Western economists...Piketty has modified his thinking since his previous opus. Rather than imply that rising inequality is a problem inherent in capitalism, he now suggests that the levels of inequality we get are the ones we countenance-that they're entirely a matter of political and ideological choices. -- Idrees Kahloon * New Yorker * Packed with fascinating detail and vast quantities of skillfully assembled data...A systematic examination of inequality across time and place, and of the ideas the powerful have used to justify it...We learn a good deal about the lengths to which the powerful will go to assert their privilege (and the often outrageous injustice this entails), and about the only things that have ever thwarted them: mass violence and progressive taxation...Whether or not his revolution without revolutionaries can get us where we need to go, his analysis of how we got here demands our attention. -- Geoff Mann * London Review of Books * Seven years a