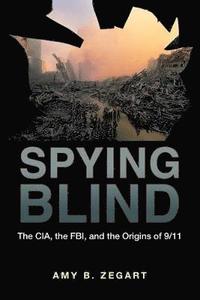 av Amy B Zegart
Häftad Engelska, 2009-03-09
323
Köp
Spara som favorit
Finns även som
Visa alla 1 format & utgåvor
In this pathbreaking book, Amy Zegart provides the first scholarly examination of the intelligence failures that preceded September 11. Until now, those failures have been attributed largely to individual mistakes. But Zegart shows how and why the intelligence system itself left us vulnerable. Zegart argues that after the Cold War ended, the CIA and FBI failed to adapt to the rise of terrorism. She makes the case by conducting painstaking analysis of more than three hundred intelligence reform recommendations and tracing the history of CIA and FBI counterterrorism efforts from 1991 to 2001, drawing extensively from declassified government documents and interviews with more than seventy high-ranking government officials. She finds that political leaders were well aware of the emerging terrorist danger and the urgent need for intelligence reform, but failed to achieve the changes they sought. The same forces that have stymied intelligence reform for decades are to blame: resistance inside U.S. intelligence agencies, the rational interests of politicians and career bureaucrats, and core aspects of our democracy such as the fragmented structure of the federal government. Ultimately failures of adaptation led to failures of performance. Zegart reveals how longstanding organizational weaknesses left unaddressed during the 1990s prevented the CIA and FBI from capitalizing on twenty-three opportunities to disrupt the September 11 plot. Spying Blind is a sobering account of why two of America's most important intelligence agencies failed to adjust to new threats after the Cold War, and why they are unlikely to adapt in the future.
Visa hela texten

Co-Winner of the 2008 Louis Brownlow Award, National Academy of Public Administration "Ever since the end of the cold war, the Central Intelligence Agency, the Federal Bureau of Investigation, the National Security Agency, and more than a dozen other intelligence organizations that answer to the president had been struggling to adapt their sources and methods to the new menace. As Amy B. Zegart argues in Spying Blind, they just weren't up to the job... Zegart, blaming institutional inertia more than individuals, counts more than 20 specific instances where the CIA or the FBI missed chances to stop the 9/11 attacks."--Christopher Dickey, Newsweek "Don't be fooled by the title of this book. It sounds as if the author is going to tread the same turf as Richard Clarke, Tim Weiner, Bob Woodward and a host of others, including the 9/11 Commission Report, but Amy Zegart in Spying Blind goes several steps beyond her predecessors... Zegart presents the facts behind this state of affairs in a more scholarly way than we've previously seen, by examining over 300 intelligence reform recommendations and by tracing the history of CIA and FBI counter-terrorism efforts from 1991 to 2001. ... Spying Blind provides a clear and comprehensive overview of a dire situation -- the kind of knowledge that comes in handy when you call or write your congressman or, for that matter, when you vote."--Mary Welp, The Courier-Journal "Zegart argues that any meaningful improvement in U.S. intelligence coordination and effectiveness will require the president and Congress to take on the Defense Department... Spying Blind is a thorough examination of those reform failures. In it, Zegart sifts through hundreds of intelligence recommendations...and findings by the 9/11 Commission and congressional committees."--David J. Garrow, Wilson Quarterly "One of the many strengths of Zegart's book is that she examines not only current problems in the intelligence services but past efforts to correct them."--Simon Chesterman, Survival "Amy B. Zegart is one of the most talented young scholars in the field of intelligence studies. She has a flair for empirical research... [T]his highly readable and well-documented book is commendable for its exhaustive research and lucid writing style."--Loch K. Johnson, Political Science Quarterly "This is a well-written and informed book that should become part of the post-9/11 debate on intelligence agencies and their adaptation to the new world that opened up on that day... This is all excellent book, with detailed research, and a highly readable presentation of absorbing analysis."--Alan Warburton, International History Review "Spying Blind adds a valuable empirical study to the literature on understanding culture and bureaucratic processes in foreign policy decision-making."--Peter Hough, European Legacy

Amy B. Zegart is associate professor of public policy at the University of California, Los Angeles. She is the author of "Flawed by Design: The Evolution of the CIA, JCS, and NSC".