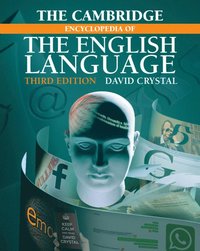 The Cambridge Encyclopedia of the English Language

av David Crystal
Häftad Engelska, 2018-11-29
349
Köp
Spara som favorit
Finns även som
Visa alla 1 format & utgåvor
Now in its third edition, The Cambridge Encyclopedia of the English Language provides the most comprehensive coverage of the history, structure and worldwide use of English. Fully updated and expanded, with a fresh redesigned layout, and over sixty audio resources to bring language extracts to life, it covers all aspects of the English language including the history of English, with new pages on Shakespeare's vocabulary and pronunciation, updated statistics on global English use that now cover all countries and the future of English in a post-Brexit Europe, regional and social variations, with fresh insights into the growing cultural identities of 'new Englishes', English in everyday use with new sections on gender identities, forensic studies, and 'big data' in corpus linguistics, and digital developments, including the emergence of new online varieties in social media platforms such as Facebook, Twitter and WhatsApp. Packed with brand new colour illustrations, photographs, maps, tables and graphs, this new edition is an essential tool for a new generation of twenty-first-century English language enthusiasts.
Visa hela texten

David Crystal is one of the world's foremost authorities on language, having published extensively over the past fifty years on his research work in English language studies. He has authored the hugely successful The Cambridge Encyclopedia of Language (Cambridge, 3rd Edition, 2010) English as a Global Language (2nd edition, 2003) and Language and the Internet (Cambridge, 2nd edition, 2006) among countless other books. An internationally renowned writer, editor, lecturer and broadcaster, he received an OBE in 1995 for his services to the study and teaching of the English language. He is Honorary Professor of Linguistics at the University of Wales, Bangor and was made a Fellow of the British Academy (FBA) in 2000. David Crystal is the director of the Ucheldre Centre, Wales, a multi-purpose arts and exhibition centre.