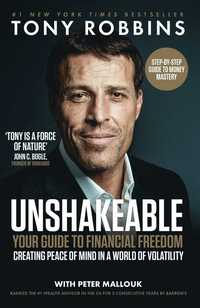 Your Guide to Financial Freedom

av Tony Robbins, Peter Mallouk
(4 röster)  |  Läs 1 recension
Häftad Engelska, 2017-02-28
169
Köp
Spara som favorit
Skickas inom 3-6 vardagar.
Fri frakt inom Sverige för privatpersoner.
Finns även som
Visa alla 1 format & utgåvor
*THE NEW YORK TIMES BESTSELLER* Tony Robbins, arguably the most recognizable life and business strategist and guru, is back with a timely, unique follow-up to his smash New York Times bestseller Money: Master the Game. Market corrections are as constant as seasons are in nature. There have been 30 such corrections in the past 30 years, yet there's never been an action plan for how not only to survive, but thrive through each change in the stock market. Building upon the principles in Money: Master the Game, Robbins offers the reader specific steps they can implement to protect their investments while maximizing their wealth. It's a detailed guide designed for investors, articulated in the common-sense, practical manner that the millions of loyal Robbins fans and students have come to expect and rely upon. Few have navigated the turbulence of the stock market as adeptly and successfully as Tony Robbins. His proven, consistent success over decades makes him singularly qualified to help investors (both seasoned and first-timers alike) preserve and add to their investments. 'Tony's power is super-human' Oprah Winfrey 'He has a great gift. He has the gift to inspire' Bill Clinton 'Tony Robbins needs no introduction. He is committed to helping make life better for every investor' Carl Icahn 'The high priest of human potential. The world can't get enough of Anthony Robbins' The New York Times
Visa hela texten

'The high priest of human potential. The world can't get enough of Anthony Robbins.' * The New York Times * 'Tony Robbins needs no introduction. He is committed to helping make life better for every investor.' -- Carl Icahn 'He has a great gift. He has the gift to inspire.' -- Bill Clinton 'Tony's power is super-human' -- Oprah Winfrey

Tony Robbins is a bestselling author, entrepreneur, and philanthropist. For more than thirty-seven years, millions of people have enjoyed the warmth, humor, and the transformational power of Mr. Robbins's business and personal development events. He is one of the nation's top life and business strategists. He's called upon to consult and coach with some of the world's finest athletes, entertainers, Fortune 500 CEOs, and presidents. Robbins is a founder or partner in over a dozen companies in industries as diverse as a five-star Fijian island resort to custom 3D printed Prosthetic limbs. Through the Tony Robbins foundation and his matching funds, Tony has provided over 400 million meals in his partnership with Feeding America. He lives in Palm Beach, Florida. Peter Mallouk is the president of Creative Planning, Inc. Peter was chosen as the #1 Independent Financial Advisor in America for three straight years (2013-2015) by Barron's and was selected as one of Worth Magazine's Power 100 (2017, 2018), a list featuring the 100 most powerful people in global finance. In 2017, Peter was a recipient of the Ernst & Young Entrepreneur of the Year Award. CNBC named his company, Creative Planning, the #1 Independent Wealth Management Firm in the United States (2015). In 2017, Barron's named Creative Planning the #1 Independent Wealth Management Firm in America. He co-authored Unshakeable with Tony Robbins. He lives in Kansas City, MO.