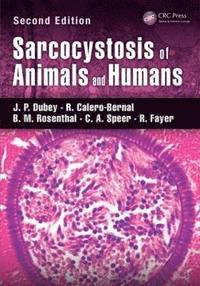 Sarcocystosis of Animals and Humans

av J P Dubey, R Calero-Bernal, B M Rosenthal, C A Speer, Ronald Fayer
Inbunden Engelska, 2015-09-25
1489
Köp
Spara som favorit
Skickas inom 5-8 vardagar.
Fri frakt inom Sverige för privatpersoner.
Sarcocystis is one of the most prevalent parasites of livestock and also infects many wild mammals, birds, and humans. Written by the authors who pioneered studies of Sarcocystosis of domestic animals, Sarcocystosis of Animals and Humans, Second Edition provides a current and comprehensive review of Sarcocystis and the infections it causes in animals and humans. The book reviews the history, structure, life cycle, pathogenesis, lesions, clinical signs, diagnosis, immunity, epidemiology, treatment, prevention, and control of Sarcocystosis. See What's New in the Second Edition: New section on molecular diagnosis and DNA characterization of Sarcocystis species New section on clinical sarcocystosis outbreaks in humans is added with a summary of all reports, symptoms, diagnosis, and treatment New section on acute fatal outbreaks of sarcocystosis in birds Complete description of the life cycles of all Sarcocystis species List of all species whose life cycles are known Comprehensive information on diagnosis, including molecular diagnosis Additional information on zoonoses In-depth coverage of treatment, control, and prevention Maintaining the format that made the first edition so popular, this new edition covers recent developments and excludes information that has become redundant. The authors include all literature and provide a comprehensive review of biology, clinical disease, economic losses, public health concerns, diagnosis, treatment, and prevention. They have tabulated information on all Sarcocystis species by host and listed species that should be considered species inquirende/invalid.
Visa hela texten

"Sarcocystosis is a zoonosis and is, par excellence, an example of where the veterinary and medical professions and those from associated specialist disciplines should be working in concert. The result, as this book illustrates splendidly, is a synergy that not only leads to important scientific advances but also contributes to the health and welfare of both people and animals." - John E. Cooper, Veterinary Record

J. P. Dubey, MVSc, PhD, was born in India. He earned his veterinary degree in 1960, and master's in veterinary parasitology in 1963, from India. He earned PhD in medical microbiology in 1966 from the University of Sheffield, England. He obtained postdoctoral training with Dr. J. K. Frenkel, Department of Pathology and Oncology, University of Kansas Medical Center, Kansas City, from 1968 to 1973. From 1973 to 1978, he was associate professor of veterinary parasitology, Department of Pathobiology, Ohio State University, Columbus. He was professor of veterinary parasitology, Department of Veterinary Science, Montana State University, Bozeman, from 1978 to 1982. He is presently a senior scientist, Animal Parasitic Diseases Laboratory, Beltsville Agricultural Research Institute, Agricultural Research Service, U.S. Department of Agriculture, Beltsville, Maryland. Dr. Dubey has spent over 50 years researching protozoa, including Toxoplasma, Neospora, Sarcocystis, and related cyst-forming coccidian parasites of humans and animals. He has published over 1400 research papers in international journals, more than 250 of which are on sarcocystosis. In 1985, he was chosen to be the first recipient of the "Distinguished Veterinary Parasitologist Award" by the American Association of Veterinary Parasitologists. Dr. Dubey is a recipient of the 1995 WAAVP Pfizer Award for outstanding contributions to research in veterinary parasitology. He also received the 2005 Eminent Parasitologists Award by the American Society of Parasitologists. The Thomas/Institute for Scientific Information identified him as one of the world's most cited authors in plant and animal sciences over the last decade. In 2003, he was selected for the newly created Senior Scientific Research Service (SSRS), and is one of the few scientists and executives within the USDA's Agricultural Research Service; selection for this position is by invitation only, and is approved by the Secretary of Agriculture. In 2010, he was elected to the U.S. National Academy of Sciences, Washington, DC, and inducted in the USDA-ARS Hall of Fame. Rafael Calero-Bernal, DVM, MSc, PhD, was born in Badajoz (Spain). He earned his degree in veterinary medicine at the University of Extremadura, Spain in 2006. One year later he attended the Official Master's in meat science and technology at the same institution. In 2011, Dr. Calero-Bernal earned PhD in European framework in veterinary medicine. Since 2008, he is a professor of the Animal Health Department at the University of Extremadura, developing teaching periods at the Faculty of Veterinary Medicine of the University of Lisbon (Portugal). He has been a research personnel in the Spanish National Microbiology Centre and the Tropical Medicine National Centre, both belonging to the Instituto de Salud Carlos III (Spain). Dr. Calero-Bernal developed several research stays at Istituto Superiore di Sanita (Italy), Instituto Nacional de Saude (Portugal), Fundacao Oswaldo Cruz (Brazil), and Centro de Referencia para el Control de Endemias (Equatorial Guinea). Currently he is a postdoctoral researcher in the Agricultural Research Service, United States Department of Agriculture. He has authored more than 50 articles and 4 books related to veterinary sciences. His research interests are wildlife parasites and zoonoses, especially meatborne pathogens and tissue cysts forming coccidia. Benjamin M. Rosenthal is a parasitologist with primary interests in the population genetics, phylogenetics, genomics, and epidemiology of zoonotic parasites. He is a graduate of Oberlin College and the Harvard School of Public Health. Since 1999, he has led a research program in veterinary and zoonotic parasitic diseases for the USDA's Agricultural Research Service, where his studies have encompassed toxoplasmosis, sarcocystosis, trichinellosis, and related diseases. His work uses genetic variation within and among parasitic microorganisms to (1) develop improved methods for