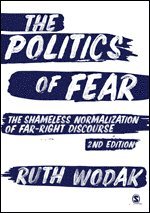 The Politics of Fear

The Shameless Normalization of Far-Right Discourse

We are now witnessing the shameless normalization of a political discourse built around nationalism, xenophobia, racism, sexism, antisemitism and Islamophobia. But what does this change mean? What caused it? And how does far-right populist discourse work?

The Politics of Fear traces the trajectory of far-right politics from the margins of the political landscape to its very centre. It explores the social and historical mechanisms at play, and expertly ties these to the ?micro-politics? of far-right language and discourse.

From speeches to cartoons to social media posts, Ruth Wodak systematically analyzes the texts and images used by these groups, laying bare the strategies, rhetoric and half-truths the far-right employ. The revised second edition of this best-selling book includes:

Critical, analytical and impassioned, The Politics of Fear is essential reading for anyone looking to understand how far-right and populist politics have moved into the mainstream, and what we can do about it.

Through sharp and lucid analysis based on a wealth of examples and case studies, the second edition of Ruth Wodak’s masterly The Politics of Fear provides readers from all backgrounds with the essential tools to fully grasp the threat the far right poses and the role the mainstream has played in its rise.

The first edition of The Politics of Fear was an important book but this revised edition is even more important. Ruth Wodak shows how shamelessly successful right-wing populism has become, as it takes ideas from the far right and makes them appear as the new normal. Wodak analyses this dangerous, divisive politics with sustained brilliance.

Given international developments, the new edition of this classic study of the discourses of the extreme right is more relevant even than the first edition, in which Ruth Wodak continues a long and eminent trajectory of research on racism, anti-Semitism, xenophobia and patriarchy. This specific book is especially timely because it describes and explains in great detail the discursive and social mechanisms of the growing influence of extremist right-wing ideologies, policies and politics in Europe. This is Critical Discourse Analysis at its best.

The Politics of Fear is sadly more timely than ever. Ruth Wodak’s critical analysis provides clear insights as to why and how in a world that benefits from the free flow of goods, ideas and people, exclusionary nationalism and populism are gaining ground.

An ambitious and unflinching scholarly analysis of the discursive world of right-wing populist movements in Europe. At a time when such movements have rapidly and dramatically shifted from the periphery to the parliament, Wodak’s clear-eyed analysis has never been more urgent or important. Understanding the symbols, myths and languages deployed by such movements is key to interpreting their widespread popularity and their narrow, and often hostile, vision of Europe’s future.

In a masterful synthesis, Ruth Wodak combines argumentation theory, rhetorical and discourse-historical analysis to the resurgent discourses of right-wing populism, racism, sexism and xenophobia in Europe and the US. A highly topical insight into and inditement of the politics of fear and exclusionism.

One of the most respected and influential discourse analysts of our time offers a thorough characterization of far-right populism and its political strategies. Wodak explains the processes that have led to the rise of what she calls “shameless normalization” with examples from all over the world: from political speeches, to tweets, to posters. An essential read...