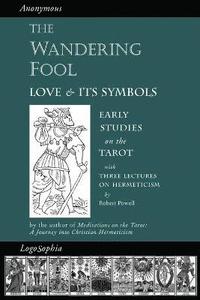 Love and its Symbols, Early Studies on the Tarot

av Valentin Tomberg, Robert Powell
Häftad Engelska, 2009-05-29
219
Köp
Spara som favorit
Skickas inom 10-15 vardagar.
Fri frakt inom Sverige för privatpersoner.
In 1982 there appeared a remarkable book, written by an author who wished to remain anonymous, entitled Meditations on the Tarot: A Journey into Christian Hermeticism. This book was destined to become a spiritual classic of the twentieth century. Distinguished scholar Antoine Faivre called it "the most beautiful and instructive book of the twentieth century concerning western esotericism." Father Bede Griffiths said "to me it is the last word in wisdom." Trappist Abbot Basil Pennington wrote "it is such a rich collection of wisdom drawn from such a staggering number of diverse sources that it leaves the mind almost reeling. Besides the Bible we find the Upanishads, the Cabbala, the Hermeticists, and men as diverse as Origen and Chardin, Plato and Bergson, Jung and John of the Cross, Kierkegaard and Nietzsche. It is without doubt the most extraordinary work I have ever read." And Cardinal Hans Urs von Balthasar described the author as "a thinking, praying Christian of unmistakable purity."

Students of Meditations on the Tarot now have cause for celebration, for in 2007 a collection of the author's notes was published - preliminary studies of the images of the Tarot cards, illustrating the method he followed. This methodology is now revealed for the first time in English translation through the inclusion of material published in Part Two of this volume. Unfortunately, the notes cover only the last nine Arcana, from XIV to XXII, the notes to the first thirteen Arcana having gone missing.

Part One comprises three lectures held by Robert Powell, the translator of Meditations on the Tarot into English from the original French manuscript. These lectures, held in California in 2006, 2007, and 2008, were delivered to an audience of friends of Christian Hermeticism, who gather every year to converse and share concerning the path of Christian Hermeticism. The second lecture, in particular, serves as an introduction to Part II. Also included is additional background material from the Luxembourg (Kairos) and German (Achamoth) editions.
Visa hela texten