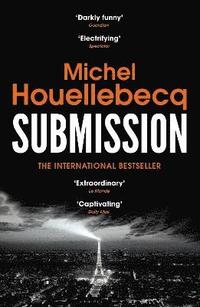 av Michel Houellebecq
(2 röster)
Häftad Engelska, 2016-09-01
119
Köp
Spara som favorit
Finns även som
Visa alla 1 format & utgåvor
As the 2022 French Presidential election looms, two candidates emerge as favourites: Marine Le Pen of the Front National, and the charismatic Muhammed Ben Abbes of the growing Muslim Fraternity. Forming a controversial alliance with the political left to block the Front National's alarming ascendency, Ben Abbes sweeps to power, and overnight the country is transformed. This proves to be the death knell of French secularism, as Islamic law comes into force: women are veiled, polygamy is encouraged and, for our narrator Francois - misanthropic, middle-aged and alienated - life is set on a new course. Submission is a devastating satire, comic and melancholy by turns, and a profound meditation on faith and meaning in Western society.
Visa hela texten

A work of real literary distinction...[Houellebecq] has been the novelist who has most fearlessly and presciently tackled the rise of Islamic extremism in recent years...He is a writer with a gift for telling the truth, unlike any other in our time - I've been consistently saying he is the writer who matters most to me for many years now. I've read Submission twice in the last week with ever growing admiration and enjoyment. There's been no English-language novel this good lately. With Submission Houellebecq has inserted himself right into the centre of the intellectual debate that was already raging in France about Islam and identity politics...There is nobody else writing now more worth reading. -- David Sexton * Evening Standard * One cannot be said to be keeping abreast of contemporary literature without reading his work. -- Karl Ove Knausgaard * New York Times * One cannot be said to be keeping abreast of contemporary literature without reading his work. -- Karl Ove Knausgaard * New York Times * The narration is enjoyably sardonic, a pungent mixture of deadpan jokes about sexual politics and close reading...Darkly clever and funny. * Guardian * A fine, deeply literary work...It is genuinely more admiring than critical of Islam...It's electrifying; no recent English-language novel compares. * Spectator * Houellebecq's placid dystopias have been among the only contemporary novels worth dropping things for - and this is arguably the best of the lot...a bleakly funny satire on submission and salvation...I can't think of another contemporary writer who bares their soul so fearlessly - or with such rewards. * Evening Standard * Witty and deft...The polemical power of his imagination...approaches that of two 20th-century masterpieces, Nineteen Eighty Four and Brave New World...This is an important novel...It's worth remembering that Houellebecq has form in demonstrating that life sometimes imitates art. * Financial Times * Houellebecq's latest, Submission, brings his project to its most accessible realization yet. What's the project? Jerking your chain at the highest possible level, which a lot of people can sense from the vibe around Houellebecq, and therefore pre-emptively avoid. You shouldn't. The free and wild play of his hatred for modernity and its usual self-flattering reassurances is a tonic to be relished. Houellebecq's respect for his avowed models - Lovecraft, and here, Huysmans, reveals a sturdy commitment to older narrative forms, even genres - he's a horror writer, here updating the 'Deal-with-the-devil' tale. Lorin Stein's relaxed translation catches how Houellebecq's insouciant revulsion for propriety, and his congenital self-loathing, trickles down into a vernacular full of tiny slippages in and out of bourgeois formality, somewhat akin to Inspector Clouseau trying to recapture his authoritativeness after a pratfall. In the past these have read as errors of tone, but in Submission, they're as funny as I think Houellebecq intends. -- Jonathan Lethem No question about the book of the year: it's Michel Houellebecq's Submission in Lorin Stein's fluent translation...Following its publication, the Guardian asked brightly: 'Does Houellebecq really hate women and Muslims, or is he just a twisted provocateur?' But the book is more nuanced and more troubling than that. The narrator doesn't register women who aren't young and shaggable - tell me that's not how men see women - and in this story, it's libidinous intellectuals who succumb to the new order because it suits them. Plausible? Sort of. Worrying? Yep. Important? Very. -- Melanie McDonagh * Spectator, Books of the Year * Submission is both a more subtle and less immediately scandalous satire than the brouhaha surrounding it might suggest...All described with lashings of Houellebecq's characteristically phosphorescent bile...That we feel Houellebecq's satire (like all the best from Swift to Celine to Waugh) is only half in jest makes reading Submission a shifty, disc

Michel Houellebecq is a poet, essayist and novelist. He is the author of several novels including The Map and the Territory (winner of the Prix Goncourt), Atomised, Platform, Whatever and Submission. He was awarded the Legion d'Honneur in 2019.