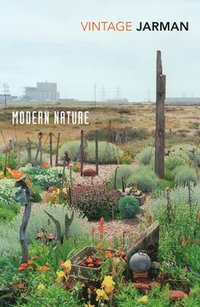 av Derek Jarman
Häftad Engelska, 2018-05-03
129
Köp
Spara som favorit
Finns även som
Visa alla 1 format & utgåvor
Read this meditative and inspiring diary of Derek Jarman's famous garden at Dungeness, which is also a powerful account of his life as an HIV positive man in the 1980s. In 1986 Derek Jarman discovered he was HIV positive and decided to make a garden at his cottage on the barren coast of Dungeness. Facing an uncertain future, he nevertheless found solace in nature, growing all manner of plants. While some perished beneath wind and sea-spray others flourished, creating brilliant, unexpected beauty in the wilderness. Modern Nature is both a diary of the garden and a meditation by Jarman on his own life: his childhood, his time as a young gay man in the 1960s, his renowned career as an artist, writer and film-maker. It is at once a lament for a lost generation, an unabashed celebration of gay sexuality, and a devotion to all that is living. 'An essential - urgent - book for the 21st Century' Hans Ulrich Obrist This new edition features an introduction from Olivia Laing, the author of Crudo
Visa hela texten

The most beautiful & furious book of all time -- Olivia Laing An essential - urgent - book for the 21st Century -- Hans Ulrich Obrist, Artistic Director of the Serpentine Gallery A marvellous, moving book * Sunday Telegraph * Jarman gave his garden a certain narrative; perhaps he treated it a bit like a film or theatre set. His films were visionary, eccentric, romantic and rebellious, all of which could also be said about his garden * Guardian * It's hard not to warm to the man who, in the face of all the personal and professional hardships described in this book, can still regard himself as 'the most fortunate film-maker of my generation * Guardian *

Derek Jarman was born in London in 1942. His career spanned decades and genres, from painter, theatre designer, director, film maker, to poet, writer, campaigner and gardener. His features include Sebastiane (1976), Jubilee (1978), Caravaggio (1986), The Last of England (1987), Edward II (1991) and Blue (1993). His paintings - for which he was a Turner Prize nominee in 1986 - continue to be exhibited worldwide, and his garden in Dungeness remains a site of pilgrimage to fans and newcomers alike.