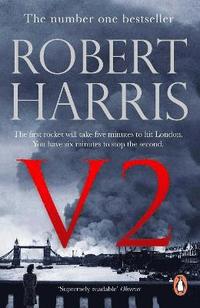 av Robert Harris
Häftad Engelska, 2021-07-08
113
Köp
Spara som favorit
Finns även som
Visa alla 2 format & utgåvor
'Immersive' Guardian 'Stunning' Daily Express 'Riveting' Telegraph Victory is close. Vengeance is closer. Rudi Graf used to dream of sending a rocket to the moon. Instead, he has helped to create the world's most sophisticated weapon: the V2 ballistic missile, capable of delivering a one-ton warhead at three times the speed of sound. In a desperate gamble to avoid defeat in the winter of 1944, Hitler orders ten thousand to be built. Graf is tasked with firing these lethal 'vengeance weapons' at London. Kay Caton-Walsh is an officer in the Women's Auxiliary Air Force who joins a unit of WAAFs on a mission to newly liberated Belgium. Armed with little more than a slide rule and a few equations, Kay and her colleagues will attempt to locate and destroy the launch sites. As the death toll soars, Graf and Kay fight their grim, invisible war - until one final explosion of violence causes their destinies to collide... 'A riveting read with a corker of a twist' Daily Telegraph 'Supremely readable' Observer 'Delivers one hell of a punch' Express 'Captures the real nature of war. Gripping' Ben MacIntyre
Visa hela texten

A riveting read . . . with a corker of a twist. * Telegraph * [I]mmersive and engaging. * Guardian * V2 is a stunning achievement; a gripping page-turner that remains highly thought-provoking. * Daily Express * An immersive thriller set against a tense historical backdrop . . . For all its pace - you will zip through it in no time - the rewards are in the meta-story. But Harris's deceptively effortless prose means you barely notice. The effect is one of total immersion: you can feel the cold, taste the bacon sandwiches and imagine the trolleys squeaking across the floor. * Financial Times * I want to be the first to say it: Robert Harris scores a direct hit with V2. I was enthralled.

Robert Harris is the author of fifteen bestselling novels: the Cicero Trilogy - Imperium, Lustrum and Dictator - Fatherland, Enigma, Archangel, Pompeii, The Ghost, The Fear Index, An Officer and a Spy, which won four prizes including the Walter Scott Prize for Historical Fiction, Conclave, Munich, The Second Sleep, V2 and Act of Oblivion. His work has been translated into forty languages and he is a Fellow of the Royal Society of Literature. He lives in West Berkshire with his wife, Gill Hornby.