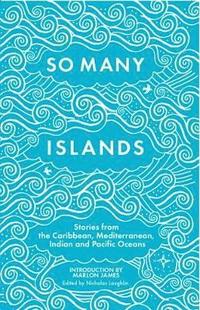 Stories from the Caribbean, Mediterranean, Indian and Pacific Oceans

av Nicholas Laughlin
Häftad Engelska, 2018-03-20
119
Köp
Spara som favorit
Kan levereras innan julafton!
Finns även som
Visa alla 2 format & utgåvor
'This is the real globalism, a glorious cacophony that seeks no common ground other than attitude.' Marlon James, winner of the Booker Prize So Many Islands breaks out bold new writing from the distant shores of countries in the Caribbean, Mediterranean, Indian and Pacific Oceans. Here you will find poems about revolution and protest. You will be transported to Marakei,'the women's island', and join the battle to save a beached whale. Alongside family politics, So Many Islands tackles nuclear testing and climate change global issues that are close to the heart of these precariously poised communities. Giving voice to their challenges and triumphs, these writers create a vibrant portrait of what it is like to live and love on the small islands they call home. Readers everywhere will find universal connections with these words and worlds. Antigua and Barbuda, Barbados, Bermuda, Cyprus, Grenada, Jamaica, Kiribati, Malta, Mauritius, Niue, Rotuma (Fiji), Soma, Singapore, Saint Lucia, Saint Vincent and the Grenadines, Tonga, Trinidad and Tobago
Visa hela texten

`Here are stories that don't shatter taboos so much as ignore them in the first place.' Marlon James, Winner of the 2015 Man Booker Prize; `Wide-ranging and anything but parochial.' Times Literary Supplement

Nicholas Laughlin (Trinidad and Tobago) is the editor of The Caribbean Review of Books and the arts and travel magazine Caribbean Beat, and program director of the Bocas Lit Fest, an annual literature festival and literary development organization based in Trinidad. He is also codirector of the contemporary art space Alice Yard. His book of poems The Strange Years of My Life was published in 2015. He was born and has always lived in Port of Spain, Trinidad. Nailah Folami Imoja (Barbados) is a Barbadian/British writer, performer, and educator. As a poet, novelist, and journalist, she has contributed significantly to the Barbadian litscape. Her work has been published in numerous anthologies and one of her YA novellas, Pick of the Crop, was published by Heinemann (Oxford) in 2004. She has performed her work in England, Canada, Suriname, Guyana, and Trinidad. Many of her novellas are available via smashwords.com. Marlon James (Jamaica) was born in Kingston, Jamaica, in 1970. His first novel John Crow's Devil was a finalist for the Los Angeles Times Book Prize and the Commonwealth Writers' Prize, and was a New York Times Editor's Choice. The Book of Night Women won the 2010 Dayton Literary Peace Prize and the Minnesota Book Award, and was a finalist for the 2010 National Book Critics Circle Award in fiction, as well as an NAACP Image Award. His third novel, A Brief History of Seven Killings, was awarded the Man Booker Prize in 2015, among other honours.