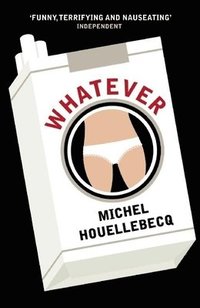 av Michel Houellebecq
(1 röst)
Häftad Engelska, 2011-05-05
129
Köp
Spara som favorit
Skickas inom 5-8 vardagar.
Fri frakt inom Sverige över 159 kr för privatpersoner.
Beställ boken senast måndag 14 december kl. 12:45 för leverans innan julafton
Just thirty, with a well-paid job, no love life and a terrible attitude, the anti-hero of this grim, funny novel smokes four packs of cigarettes a day and writes weird animal stories in his spare time. A computer programmer by day, he is tolerably content, until he's packed off with a colleague - the sexually-frustrated Raphael Tisserand - to train provincial civil servants in the use of a new computer system Houellebecq's first novel was a smash hit in France, expressing the misanthropic voice of a generation. Like A Confederacy of Dunces, Houellebecq's bitter, sarcastic and exasperated narrator vociferously expresses his frustration and disgust with the world.
Visa hela texten

Funny, terrifying and nauseating * Independent * The balance between philosophy and narrative detail is perfectly judged; the book slips down easily like a bad oyster. As is the nature of such things, it is grimly comic -- Nicholas Lezard * Guardian * Le grand fromage du jour * The Face * It could well turn out to be a cult here too ... astonishing * Time Out * Snappy, bite-sized, and often very funny. Is it European exhaustion? Is it the soul of man under late capitalism? Millenial gloom? Post-Christian despair? Is it the death of love? Whatever. But Houellebecq describes it perfectly * Literary Review * This boy needs serious therapy. He may be beyond help * Washington Post * The mischief-making enfant terrible of new-wave French fiction * Independent * Houellebecq captures precisely the cynical disillusionment of disaffected youth * Booklist *

Novelist and poet Michel Houellebecq was born in 1958, on the French island of Reunion. At the age of six, Michel was given over to the care of his paternal grandmother, a communist, whose family name he later adopted. Houellebecq has won many prizes, including the Prix Flore in 1996, the Grand Prix National des Lettres Jeunes Talents in 1998, the Prix Novembre and, most recently, the Prix Goncourt in 2010. His first album, Presence Humaine, was released in 2000. He currently lives in Spain.