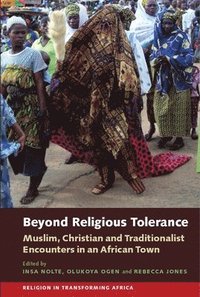 av Insa Nolte, Olukoya Ogen, Rebecca Jones
Inbunden Engelska, 2017-01-20
559
Köp
Spara som favorit
Finns även som
Visa alla 1 format & utgåvor
Since the end of the Cold War, and especially since 9/11, religion has become an increasingly important factor of personal and group identification. Based on an African case study, this book calls for new ways of thinking about diversity that go "beyond religious tolerance". Focusing on the predominantly Muslim Yoruba town of Ede, the authors challenge the assumption that religious difference automatically leads to conflict: in south-west Nigeria, Muslims,Christians and traditionalists have co-existed largely peacefully since the early twentieth century. In some contexts, Ede's citizens emphasise the importance and significance of religious difference, and the need for tolerance.But elsewhere they refer to religious boundaries in passing, or even celebrate and transcend religious divisions. Drawing on detailed ethnographic and historical research, survey work, oral histories and poetry by UK- and Nigeria- based researchers, the book examines how Ede's citizens experience religious difference in their everyday lives. It examines the town's royal history and relationship with the deity Sango, its old Islamic compounds and itsChristian institutions, as well as marriage and family life across religious boundaries, to illustrate the multiplicity of religious practices in the life of the town and its citizens and to suggest an alternative approach to religious difference. Insa Nolte is Reader in African Studies at the University of Birmingham, and Visiting Research Professor at Osun State University, Osogbo. She is President of the African Studies Association of the UK(2016-18) and Principal Investigator of the ERC project "Knowing Each Other: Everyday Religious Encounters, Social Identities and Tolerance in Southwest Nigeria". Olukoya Ogen is Provost of Adeyemi College of Education, Ondo; Professor of History at Osun State University, Osogbo; and Visiting Senior Research Fellow at the University of Birmingham. He is the Nigerian coordinator of the "Knowing Each Other" project. Rebecca Jones is Postdoctoral Research Fellow on the "Knowing Each Other" project. Her book, A Cultural History of Nigerian Travel Writing, will be published by James Currey in 2017. Nigeria: Adeyemi College Academic Press (paperback)
Visa hela texten

The clarity of expression, accompanied by pictorial representations, makes the book appealing and also makes for good reading to both the academic and the nonacademic audience. This work not only showcases the unique historical and cultural realities of Yoruba, it also illustrates the strong bond that exists among the Yoruba beyond the divisive power of religion. It has added to reliable materials for further research in the area of religious diversity in Africa and beyond. * RELIGIOUS STUDIES REVIEW * [A]t a moment when many Westerners perceive an inevitable 'clash of civilizations' between Islam and the West/Christendom, Beyond Religious Tolerance offers a valuable alternative where Americans and Europeans would be least likely to look for one. . . . [It reveals] that both tolerance and secularism as typically conceived are products of Western cultural and historical experience, which can be and have been conceived differently-if at all-in other times and places. * READING RELIGION * A truly comprehensive and well-balanced overview of religious life in Ede from many different angles . this book is a must not only for scholars interested in Islam, Christianity, and African religion in Yorubaland, but for anybody interested in the governance of religious diversity. * AFRICA SPECTRUM * This book, a refreshing and articulate addition to ethnographies of religion in West Africa, captures the resiliency of peaceful coexistence across a multiplicity of religions. It should be of interest to anthropologists, historians, religious scholars, and policy makers alike, giving tangible hope to those who think peaceful existence among religions is intractable. * AMERICAN ETHNOLOGIST * This book is the product of a remarkably successful project of North-South collaboration between the University of Birmingham in the United Kingdom and Osun State University in Nigeria. The result is something quite different from a standard edited volume in which the chapters reflect the preoccupations and perspectives of individual authors rather than of the common theme of the book. Instead, the different chapters articulate closely with one another, exploring a single concrete problem from different but complementary angles. * THE JOURNAL OF AFRICAN HISTORY *