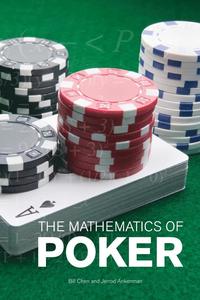 The Mathematics of Poker

av Bill Chen, Jerrod Ankenman
(1 röst)
Häftad Engelska, 2007-02-01
285
Köp
Spara som favorit
Thirty years ago the bond and option markets were dominated by traders who had learned their craft by experience. By the mid-1990s the old school grizzled traders had been replaced by a new breed of quantitative analysts, applying mathematics to the "art" of trading and making of it a science. A similar phenomenon is happening in poker. The grizzled "road gamblers" are being replaced by a new generation of players who have challenged many of the assumptions that underlie traditional approaches to the game. One of the most important features of this new approach is a reliance on quantitative analysis and the application of mathematics to the game. This book provides an introduction to quantitative techniques as applied to poker and to a branch of mathematics that is particularly applicable to poker, game theory, in a manner that makes seemingly difficult topics accessible to players without a strong mathematical background.
Visa hela texten

Bill Chen was born in Williamsburg, Virginia in 1970 and grew up in Alabama.
He received a PhD in Mathematics from the University of California at Berkeley in 1999. He
started thinking about poker while a grad student when he augmented his National Science
Foundation grant with poker winnings from local clubs. Bill represented PokerStars from 2002
to 2011 and has participated in High Stakes Poker and Poker After Dark. Bill currently lives near
Philadelphia. Bill won two World Series of Poker bracelets in 2006. Jerrod Ankenman grew up in Orange County, California. He received a BS in Business
Management from Pepperdine in 2004 and an MS in Applied Mathematics from Columbia
in 2010. Jerrod picked up poker as a hobby from reading rec.gambling.poker, and as a career
from collaborating on poker with Bill (and others). Jerrod won a World Series of Poker bracelet in 2009.